What does Wadi mean?

Wadi is an Arabic word often translated to valley. Officially wadi refers specifically to dry river beds and can also relate to smaller geographic formations. Wadi Rum is one of many well known locations that have given the word a cross lingual recognition.

Throughout the deserts of the Middle East there are few permanent water ways. The term Wadi relates specifically to these dry channels. As can be observed in Wadi Rum, the sandy sediments in the valleys are run off from the surrounding sandstone mountains. In times of heavy rain, strong water can wash through the valleys and shift large volumes of sand. This is the defining characteristic of the term ‘wadi’ in Arabic.

Why do so many locations have Wadi in their name?

Within southern Jordan many significant reference points have ‘wadi’ within their name. This is because throughout the dry desert landscapes, centres formed within valleys where seasonal rains was captured and stored. They additionally formed the primary routes that merchants and pilgrims used to navigate through the mountainous desert landscapes. 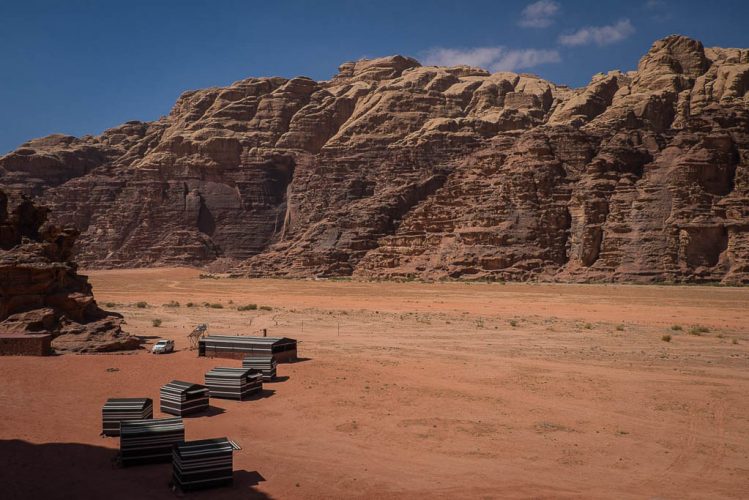 What does Wadi Rum mean?

The tourism industry has assigned the name ‘Valley of the Moon’, but this is a reference to the barren landscapes and not the origin of the name. We now know that wadi refers to the valley that exists between the large sandstone mountains. There is no certainty of the origin of the word Rum, but there are two competing explanations.

Theories of meaning of Rum

Much like English there are other connected terms for high, and this use is most commonly used in relation to elevation. Therefore it is most probable that the term refers to the altitude of the valley.

3. In Arabic the word for sand is ‘rimal’ which has plausable links to the phonetic pronunciation of ‘ramm’. This however is likely to be the result of a later attempt to form a logical explanation and does not reflect the origins of the place name.

It is most probable that the name origin is from Aramaic referring to the elevation of the valley and that the Quranic reference may in fact refer to the location. But that the place name predates the prominence of Arabic language in the area and therefore any attempts to find a reference in Arabic are futile.