The Scorpius constellation is one of the original 48 constellations listed by the Egyptian mathematician Ptolemy, who lived under Roman rule in Alexandria in the 2nd century. These constellations formed the basis for the modern list agreed by the IAU. Constellations from the southern hemisphere, unable to be seen from the Mediterranean, represent the majority of additions to the list.

Primary stars: 15 (prominent 3 prongs at the front end of Scorpius – 2 claws and a head, 6 stars in a line for the body, 5 stars in a curve for the tail, 1 star for the stinger) 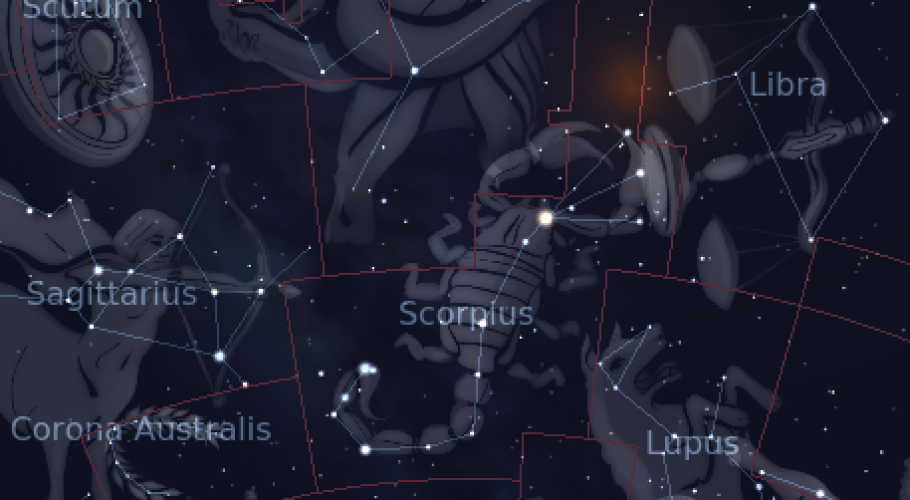 Which months can you see Scorpius constellation?

Scorpius constellation can be seen from January to September but can be found high in the sky at 21:00 during the month of July:

As time passes the constellation will gradually appear earlier in the night with ranges below showing the window of opportunity in each month. Scorpius constellation sits between 20 – 45 degrees south latitude. Therefore, the further south your position the further north it will appear in the sky. At its maximum range it is possible to see Scorpius at latitudes between +45 and -90.

February: appear on the south east horizon at 03:00. It will continue moving west until sunrise when it will be 30 degrees above the southern horizon.

August: 30 degrees above the south horizon at sunset. It will continue moving west until 23:00 when it will begin to be only partially visible on the south west horizon.

September: partially visible above the western horizon before sunset becoming difficult to observe from 21:00. 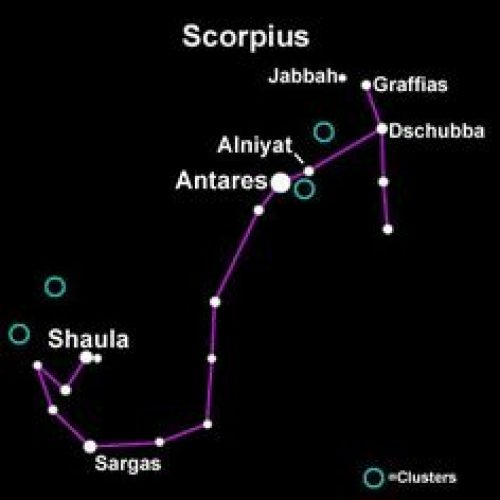 How to find Scorpius constellation?

Scorpius is very prominent constellation with a significant number of bright stars. It is nearby the bright core of the milky way which is a useful reference for finding the constellation.

Mostly Scorpius is considered easiest to find directly. The body and raised tail of the scorpion foms the shape of a fish hook. For viewers in the northern hemisphere it passes low across the southern sky. Therefore it is only present in the sky for a shorter duration of the night.

Option 1: The red star of Antares and the fork shape at the front of Scorpius

Antares a bright red star is the brightest and most prominent and is often referred to as the heart of the scorpion. This is indicative both of its location and its prominence. Nearby Antares are 3 stars that are like a fork. This group of stars is one method to identify Scorpius. These stars are furthest from the milky way and therefore easier to find in the darker region of the constellation.

Option 2: The fish hook shape of the body of Scorpius

The fish hook shape that is the outline of the scopions body with a raised tail is a common method to identify the constellation. The tail is within the path of the milky way. This hook shape shows a string of bright stars that are all among the 200 brightest.

Learn how to form the shape of Scorpius constellation

The shape of Scorpius is one of the most clear of all those in the night sky. It is both in a shape that is as one would expect and also is formed by a series of bright stars. Antares the brightest star referred to as the heart of the scorpion is considered the starting point to recognising the shape.

From Antares the front of the scorpion is formed by 3 stars to the west. They are fanned out in a fork like shape.

The body and the tail of the scorpion are formed by a series of bright stars in the shape of a fish hook.

There are 9 other stars that form the fish hook shape but to recognise the constellation it is not important to find these individually. They represent the body shape of a scorpion with a raised tail.

An additional star representing the stinger is also often identified and is near to the end of the tail moving in a direction away from the head and body. 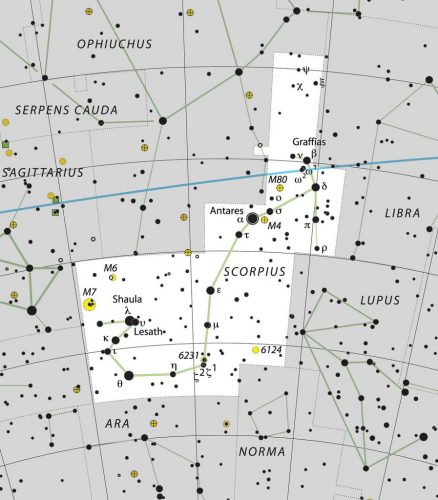 Scorpius constellation in the Ancient World

Scorpius is connected to the myth of Orion. Orion was the greatest hunter and claimed he would hunt every animal on earth. The giant scorpion was thus sent to kill Orion and protect the animals of earth. Scorpius is present throughout the summer months and Orion through the winter months. It is said that Orion hunts through the winter months and then goes into hiding through summer when the Scorpion is present in the nights sky. 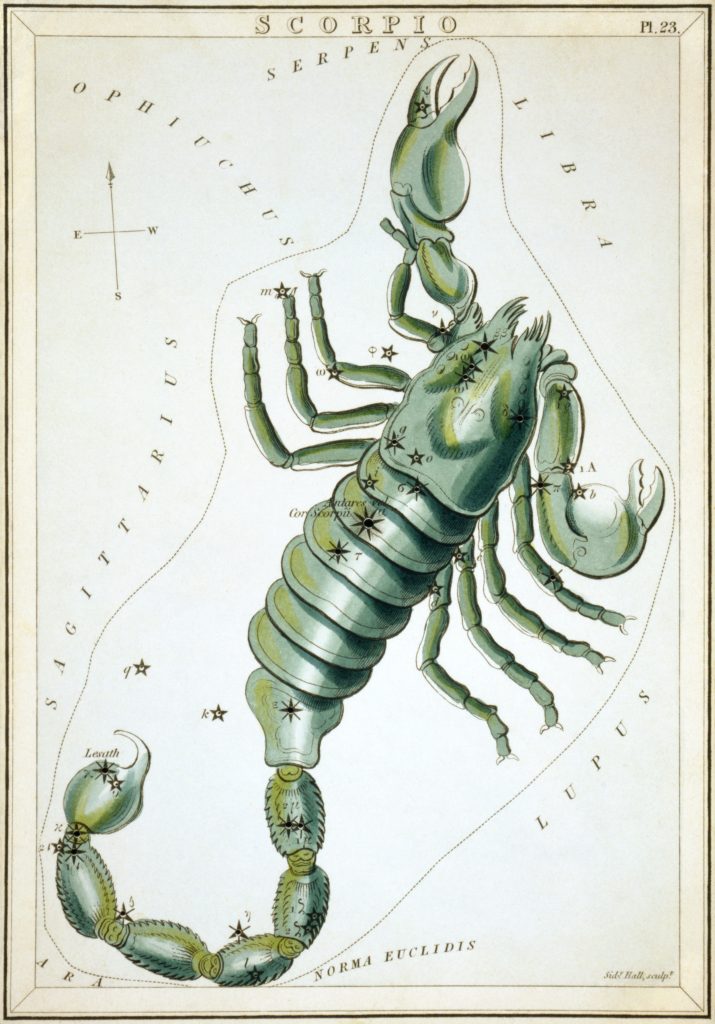 Antares is from Greek meaning ‘against Ares’ which was the ancient Greek name for the planet Mars after their god of war. It is the 15th brightest star with an apparent magnitude of +0.95. The distance from earth is 550 light years. It is a double star system with the primary star more than 200 million times the size of the sun. The star is particularly well known because of its red appearance. This is also the reason for it name when the ancient Greeks recognised it having a similar red colouration to Mars. Therefore naming it as a rival or competitor to the planet. Antares marks the front of the scorpion’s body and is referred to as the heart.

Shaula is from Arabic meaning ‘raised tail’. It is the 24th brightest star with an apparent magnitude of +1.62. The distance from earth is 570 light years. It is a triple star system with the primary star around 680 times the size of the sun. Shaula marks the tip of the scorpion’s tail.

Sargas is of Sumerian origin, however the meaning is not known. Later Persian uses the same word with the meaning ‘arrowhead’, however the term was used in reference to allocated water irrigation shares through observations of star movements. It is the 39th brightest star with an apparent magnitude of +1.86. The distance from earth is 300 light years. It is a double star system with the primary star over 17,500 times the size of the sun. Sargas marks the midpoint of the scorpion’s tail.

Dschubba is from Arabic word jebhat meaning ‘forehead’. It is the 76th brightest star with an apparent magnitude of +2.29. The distance from earth is 470 light years. It is a double star system with the primary star around 300 times the size of the sun. Dschubba marks the head of the scorpion.

Larawag is from the Wardaman Aboriginal Australian tribe meaning ‘clear sighting’. It is the 77th brightest star with an apparent magnitude of +2.29. The distance from earth is 64 light years. It is around 2000 times the size of the sun. Larawag marks the middle of the scorpion’s body.

Girtab is from Sumerian meaning ‘scorpion’ and is identified in ancient Babylonian records. It is the 83rd brightest star with an apparent magnitude of +2.39. The distance from earth is 480 light years. It is a binary star with each star around 200 times the size of the sun. Girtab marks the second last star in the scorpions tail.

Acrab is from Arabic meaning ‘scorpion’. It is the 97th brightest star with an apparent magnitude of +2.46. The distance from earth is 400 light years. Although it appears as a single source of light, it is a six star system. With amateur equipment it can be observed as a binary but each of those light sources are made by 3 stars. Acrab marks the left claw of the scorpion.

Butterfly Cluster – A star cluster of over 100 stars in the shape of butterfly.