The Virgo constellation is one of the original 48 constellations listed by the Egyptian mathematician Ptolemy, who lived under Roman rule in Alexandria in the 2nd century. These constellations formed the basis for the modern list agreed by the IAU. Constellations from the southern hemisphere, unable to be seen from the Mediterranean, represent the majority of additions to the list. 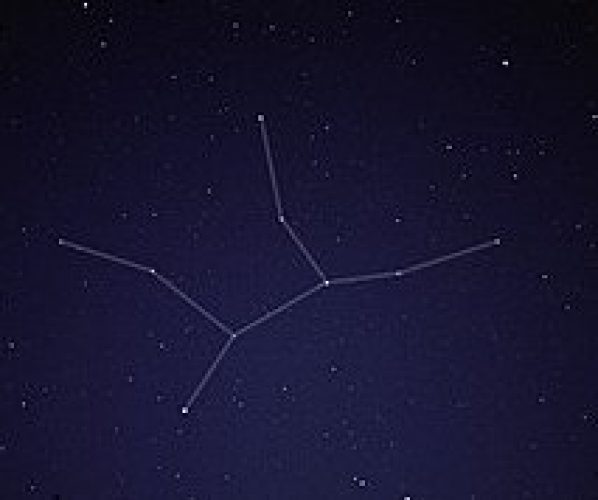 Which months can you see Virgo constellation?

Virgo constellation can be seen from November to August but can be found high in the sky at 21:00 during June:

As time passes the constellation will gradually appear earlier in the night with ranges below showing the window of opportunity in each month. Virgo constellation sits between 10 degrees north – 10 degrees south latitude. Therefore, the further south your position the further north it will appear in the sky. At its maximum range it is possible to see Virgo at latitudes between +80 and -80.

November: appear on the eastern horizon at 04:30. It will move west across the sky until sunrise when it will be 20 degrees above the southern horizon.

December: appear on the eastern horizon at 03:00. It will continue moving west until sunrise when it will be 40 degrees above the south east horizon.

April: appear on the eastern horizon at 20:00, reaching its peak at 24:30, 45 degrees above the southern horizon. It will continue moving west until 05:00 when it will begin to be only partially visible on the western horizon.

June: 45 degrees above the southern horizon at sunset. It will continue moving west until 01:00 when it will begin to be only partially visible on the western horizon.

July: 40 degrees above the south west horizon at sunset. It will continue moving west until 23:00 when it will begin to be only partially visible on the western horizon.

August: partially visible above the western horizon before sunset becoming only difficult to observe from 21:00.

Trajectory: The constellation is between 10 degrees south – 10 degrees north which means that for those in low latitudes of the northern hemisphere is will pass high in the southern sky. For those in higher latitudes of the northern hemisphere it will appear in the lower southern sky. Its peak trajectory in Wadi Rum is 45 degrees above the southern horizon from January through June. 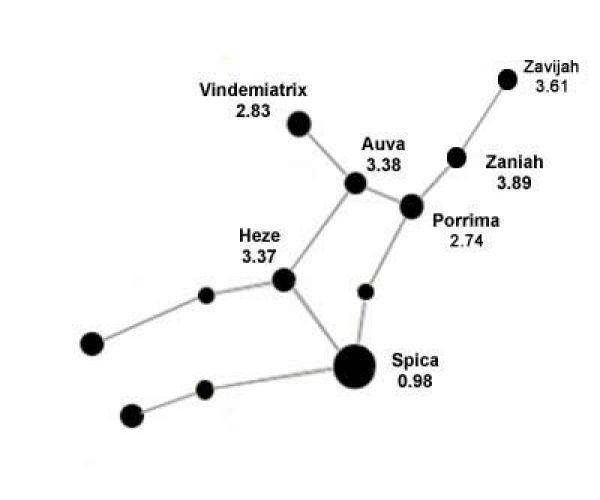 How to find Virgo constellation?

Virgo has a unclear shape and lacks bright stars making it difficult to find. However Spica is a prominent star and the constellation of Bootes points directly towards this star. Spica is also part of the spring triangle asterism.

The Bootes constellation conveniently points directly to Spica, the brightest star in Virgo. The diamond shape of Bootes can be interpreted as an arrow pointed south with Arcturus at its point. If you move in the directly of the arrow slightly further than the distance of the diamond you will find Spica.

Learn how to form the shape of Virgo constellation

There are various interpretations of the Virgo constellation. None of the widely suggested formations create an obvious shape or are easy to form but they do include the same group of stars. The shape that incorporates the most prominent stars and is the most basic is explained below with the variations subsequently explained.

The simplest form appears as a cup and saucer similar to those that we serve tea in Wadi Rum. However it is recognised to represent an ear of grain from the constellations earliest origins. The ear being the seat at the tip of the stem that the grain sits within. The cup and saucer description will be used for clarity in the explanation below.

STEP 1: Identify the five stars that represent the flat saucer

STEP 2: Identify the four stars that complete the cup sitting on the saucer

There is a complex shape that is widely depicted as the Virgo constellation that shows a polygon with 4 limbs stretching out from each corner. It would appear this was a torso with flailing limbs however several old world depictions show one of the longer limbs as reflecting the head and hair of the virgin.

To attempt to identify this shape from the cup and saucer is relatively simple with the core stars representing the base of the cup enclosing to form the torso. The top of the cup represents 2 of the limbs and the others extend from the ends of the saucer. The limbs however reach in various directions and one takes 2 right angle turns to have a dog leg bend. 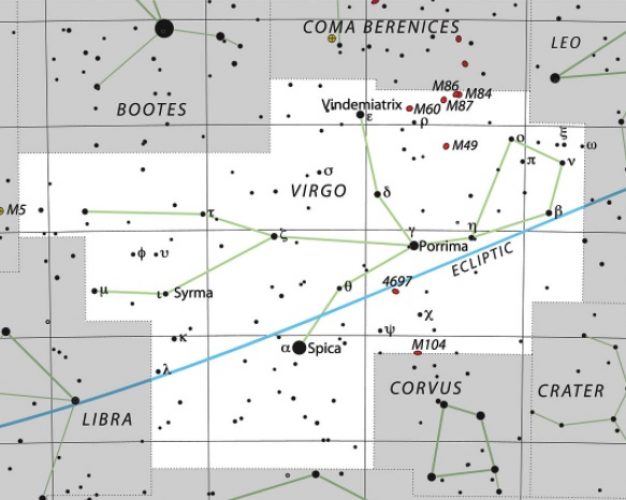 Virgo constellation in the Ancient World

The main star retains the Latin name ‘ear of grain’ recognising this past however Ptolemy associated the constellatoin closer to its link with fertility and identified it as the virgin constellation. This was able to reconcile with the female goddess’ who the constellation was associated with and likely represents the close links between fertility rituals and agriculture in the ancient world.

There is evidence that the virgin association also relates to the first harvest. Much like recognition of virgin olive oil, there are Latin references to the main star Spica as the ‘virgin ear of grain’. The constellation and star Spica begin to appear on the horizon during the wheat harvest in April and may have marked the time for ancient farmers when it would have appeared weeks earlier. It is suggested that this reference may have been take by Ptolemy when idenitifying the constellation as the virgin.

Virgo has since been associated with various myths and stories of nobel virgins including that of Virgin Mary. 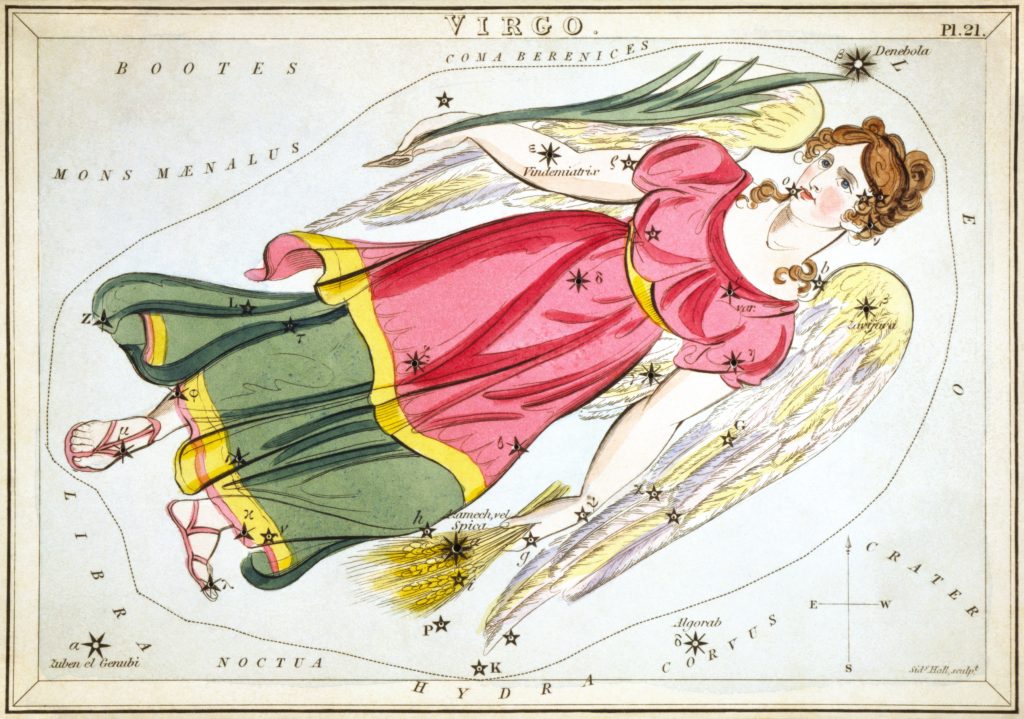 Spica is from Latin meaning ‘ear of grain’. It is the 17st brightest star with an apparent magnitude of +0.97. The distance from earth is 250 light years. It is around 416 times the size of the sun. Spica marks the left end of the saucer.

Porrima was an ancient Roman goddess of prophecy. It is the 122nd brightest star with an apparent magnitude of +2.74. It is a double star with a distance from earth is approximately 38 light years. Porrima marks the middle of the saucer and the right base of the cup.

Vindemiatrix from the Greek meaning ‘the grape harvestress’. It is the 144th brightest star with an apparent magnitude of +2.85. The distance from earth is 110 light years. It is 1190 times bigger than the sun. Vindemiatrix marks the right top of the cup.

Sombrero Galaxy – A galaxy surrounded by a large dust ring