The ‘Twins of Gemini’ is a well known zodiac constellation that represents the zodiac sign from May 21 – June 20. However, in modern times the sun passes through the Gemini constellation approximately 1 month later. Gemini is prominent in the night sky because of the two stars (Castor and Pollux) in close proximity that mark the heads of the twins, and are among the 30 brightest stars in the night sky.

The Gemini constellation is one of the original 48 constellations listed by the Egyptian mathematician Ptolemy, who lived under Roman rule in Alexandria in the 2nd century. These constellations formed the basis for the modern list agreed by the IAU. Constellations from the southern hemisphere, unable to be seen from the Mediterranean, represent the majority of additions to the list.

It is important to be aware of the specific time of year and hour of the night when deciding what to look for. These pages below show the constellations in each group so you can find the constellations that interest you. Gemini is visible in the evening sky from December to March.

Primary stars: 15 (2 for each head, 2 for each chest, 3 for the hands (as they are depicted holding one hand between them), 2 for each pelvis, 2 for knees of the left twin, 4 for the feet of both twins 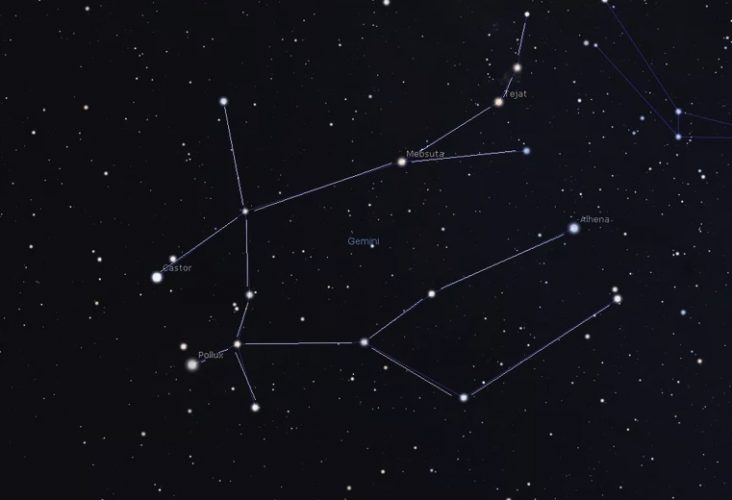 Which months can you see Gemini constellation?

As time passes the constellation will gradually appear earlier in the day with ranges below showing the window of opportunity in each month. Gemini sits between 10-35 degrees north latitude. Therefore, the further south your position the higher it will appear in the night sky.

Gemini can not be seen from earth with the naked eye during summer it passes our vision in the day time. As with all zodiac constellations where the sun passes directly through their section of the sky, they are only visible for half of the year, opposite to their zodiac month. As the zodiacs appear along the perceived equator they are visible in the southern sky from the northern hemisphere and the northern sky from the southern hemisphere. At its maximum range it is possible to see Gemini at latitudes between +90 and -60. However, the lower latitudes will have visibility for longer periods of the year.

September: rises 02:30 and visible in east sky at sunrise

November: rises 21:30 and visible high in west sky at sunrise reaching its peak at 03:30

December: rises at20:00 and visible low in west sky at sunrise reaching its peak at 01:30

May: visible in southeast sky at sunset and sets at 23:00

Not the right time for Gemini? Have a look what constellations you can see tonight. 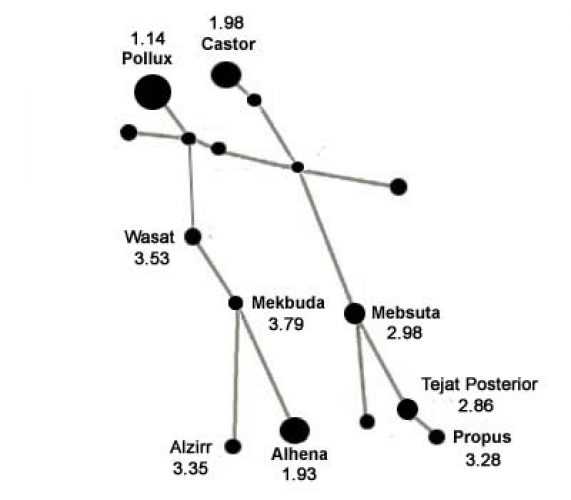 How to find Gemini constellation?

The starting point for identifying Gemini is Pollux the 17th brightest night star from earth. Castor and Pollux, the two stars marking the heads of the twins are themselves bright enough be found to identify Gemini. For those who do not have a bearing of the skies fortunately there are a variety of ways to identify Gemini.

If you are already familiar with one of the constellations below then it may prove the most convenient for you, if not use Orion as it is the most prominent and will also help you locate many other constellations

The most common method if you can locate Orion is to follow a line perpendicular from Orion’s belt north east. The stars of Castor and Pollux are approximately 4 times the distance of Orion’s right shoulder.

This brings you half way to the Big Dipper of Ursa Major. accordingly if you have similarly identified this constellation then you can use it to indicate Gemini’s position. If you follow the handle of the saucepan south west around 5 times the length of the handle. Alternatively if you have also identified the complete Ursa Major constellation the path continues through the front paws of the bear and is around 2 lengths of the tail beyond them.

If you already identified the Winter Hexagon then you have found the brightest star in Gemini. Pollux connects stars in Canis Minor and Auriga.

Learn how to form the shape of Gemini constellation

The starting point for identifying the shape of Gemini always begins with Castor and Pollux. The stars marking the heads of the twins and carrying their names. To assist in recognising the shapes

Pollux the brighter of the 2 stars is on the left, and to assist in recognising the form of the twins it is helpful to know that Pollux has a shorter body but longer legs, while Castor has an elongated body with shorter legs but they are ultimately similar heights.

Gemini is otherwise depicted as a large U with a tail. This interpretations links the same stars but only the most prominent and forms a less obvious form. It primarily depicting the bodies of the two twins connected at the head. It is suggested that this form is easier to identify for viewers for areas with significant light pollution as it focuses only on the brightest stars in the constellation. Regardless both forms are similar and even the simplified shape is useful to learn as it follows the same primary form of the two standing forms without limbs. 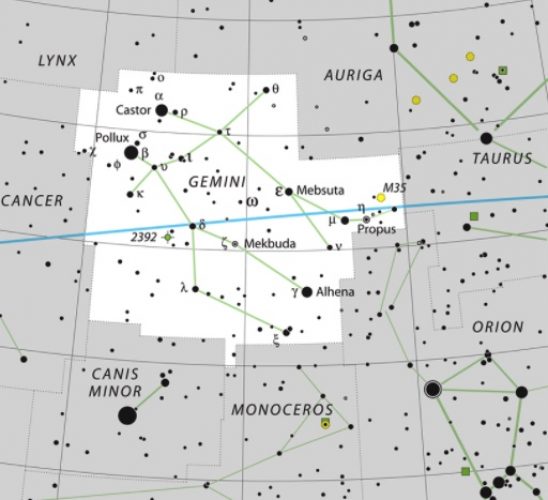 Gemini in the Ancient World

Gemini is one of the zodiac constellations through which the sun passes annually. Although it is associated with the zodiac month of June it is passed by the sun in July in modern times.

The records of the the primary stars of this constellation being known as twins linked to the pantheon date back to ancient Babylon. Gemini is however linked to the story of Castor and Pollux which the major stars have adopted the names of. Leda was married to the king of Sparta and fell pregnant. She had however been seduced by Zeus and the twins were born but each with seperate fathers. Pollux the son of Zeus was an immortal demi-god. When Castor his mortal brother died Pollux requested his father to grant Castor immortality and as a result Zeus placed them among the stars. 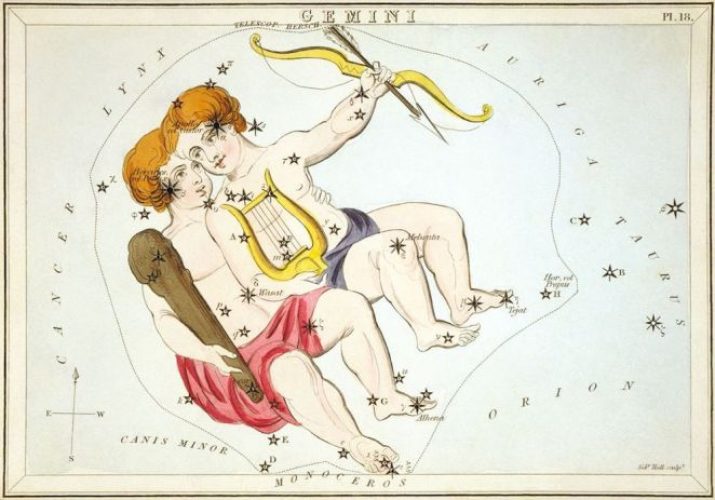 Pollux is the name of the famous immortal twin of Leda from Greek mythology. It is the 17th brightest star with an apparent magnitude of +1.14. The distance from earth is 34 light years. It is a orange giant star that is 750 times the size of the sun. Pollux as  an orbital planet with some similar attributes to our solar system. Pollux marks the head of the left twin.

Castor is the name of the famous mortal twin of Leda from Greek mythology. It is the 23rd brightest star with an apparent magnitude of +1.62. The distance from earth is 51 light years. What appears as a single form of light to the naked eye is in fact 6 stars which are separated into 3 pairs which orbit each other. Castor marks the head of the right twin.

Alhena is from the Arabic word for a camel branding similar to the identifying markers you will see on the camels in Wadi Rum. It is the 43rd brightest stat with an apparent magnitude of +1.92. The distance from earth is 109ly. It is 35 times the size of the sun. Alhena marks the left foot of Pollux.

Mebsuta is abbreviated from the Arabic for ‘outstreched lions paw’. It is the 185th brightest star in the night sky with an apparent magnitude of +3.06. The distance from earth is 840 light years. It is supergiant 2.8 million times the size of the sun. Mebsuta marks the pelvis of Castor.

Wasat from the Arabic for ‘middle’. It is the 287th brightest star with an apparent magnitude of +3.5. The distance from earth is 59 light years. It is 13 times the size of the sun. Wasat marks the pelvis of Pollux.

Mekbuda is abbreviated from the Arabic for ‘folded lions paw’. It has an apparent magnitude of +4.2 and is 1200 light years from earth. It is 220, 00 times the size of the sun. The knee of Pollux and pelvis of castor clearly formed a lion constellation in ancient Arabic astronomy evident from the names of the nearby stars. Mekbuda marks the left knee of Pollux.