The Leo constellation is one of the original 48 constellations listed by the Egyptian mathematician Ptolemy, who lived under Roman rule in Alexandria in the 2nd century. These constellations formed the basis for the modern list agreed by the IAU. Constellations from the southern hemisphere, unable to be seen from the Mediterranean, represent the majority of additions to the list.

Primary stars: 9 (Lion is in a seated position similar to the profile of the sphinx – nose, ear, neck, shoulder, chest, front feet, hips, tail, back feet)

Which months can you see Leo constellation?

Leo constellation can be seen from October to May but can be found high in the sky at 21:00 during April:

As time passes the constellation will gradually appear earlier in the night with ranges below showing the window of opportunity in each month. Leo constellation sits between 10-25 degrees north latitude. Therefore, the further south your position the further north it will appear in the sky. At its maximum range it is possible to see Leo at latitudes between +90 and -60.

September: briefly visible prior to sunrise becoming only partially visible from 05:30.

November: appear on the eastern horizon at 23:30. It will move west across the sky until sunrise when it will be 65 degrees above the southern horizon.

February: appear on the eastern horizon at 18:30, reaching its peak at 24:00 70 degrees above the southern horizon. It will continue moving west until 05:30 when it will begin to be only partially visible on the western horizon.

May: 65 degrees above the south west horizon at sunset. It will continue moving west until 01:30 when it will begin to be only partially visible on the western horizon.

June: 40 degrees above the south west horizon at sunset. It will continue moving west until 23:30 when it will begin to be only partially visible on the western horizon.

July: partially visible above the western horizon before sunset becoming only difficult to observe from 21:00.

Trajectory: The constellation is between 10-25 degrees north which means that for those in low latitudes of the northern hemisphere is will pass high in the southern sky. For those in higher latitudes of the northern hemisphere it will appear in the lower southern sky. Its peak trajectory in Wadi Rum is 70 degrees above the southern horizon from December through April.

How to find Leo constellation?

Leo constellation has numerous bright stars that make it relatively easy to find. The spring asterism of the sickle is the primary starting point when identifying Leo.

Finding the Sickle  in the night sky

The sickle is the main spring asterism. It is required to locate the Leo constellation but is also the main identifier throughout spring. As such it is used to find late winter constellations and early summer constellations. The sickle which is a long handheld agricultural tool for harvesting grain has a long curved blade in the shape of a hook. Many viewers find reference the appearance of a backwards question mark ‘؟’.

The sickle can be identified directly as explained below but the main pointer stars are in the Big Dipper. The star where the pan meets the handle and the star directly below that representing the base of the pan closest to the handle point directly at the sickle. If you follow this line south you will move directly through the middle of the sickle and meet the brightest star in the asterism Regulus which is at the southern end of the formation.

The Leo constellation is 10-25 degrees degrees north and therefore appears high in the southern sky for most northern hemisphere viewers.

STEP 1: Review the above information to confirm the timing of the Leo constellation appearance in the sky. It will be visible throughout Spring appearing late in the night and early morning throughout winter and visible only briefly in the evening in summer.

STEP 2: The sickle contains the 6 stars at the front (west) end of the lion. They appear in the shape of a backward question mark ‘؟’. It includes Regulus, Algieba, Algenubi & Adhafera, all bright stars of the night sky.

Learn how to form the shape of Leo constellation

The sickle asterism identifies 6 of the 9 stars in the Leo constellation. The view is side on of a seated lion much like the sphinx.

Following the stars from the blade of the sickle, they each represent:

There are 3 additional bright stars further east that represent the back portion of the lion. The furthest of those stars is around the same distance away as the height of the sickle if you turn it on its side. The 3 stars are in the shape of a triangle but combine with the sickle to represent the lion. 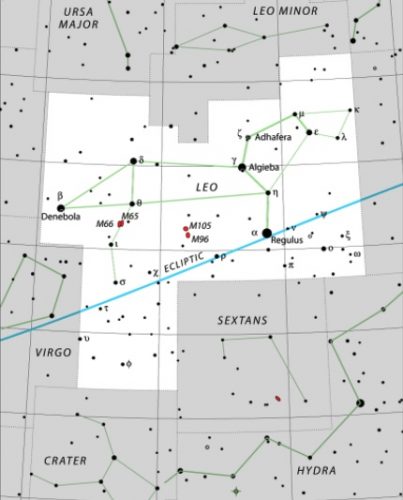 Leo constellation in the Ancient World

Leo is the lion from Hercules 12 labours. Hercules was required to complete 12 difficult tasks to redeem himself and the first was to kill the Nemean Lion. The Nemean lion could not be harmed by human weapons and its claws could cut through any armour. It would kidnap women so that warriors would come to its cave to challenge and rescue the women.

Hercules unable to use weapons was required to kill the lion with his bare hands. After killing the lion in its cave and releasing the women it held captive there, Hercules used the lions own claws to skin it and wore its fur as protection throughout the following labours. 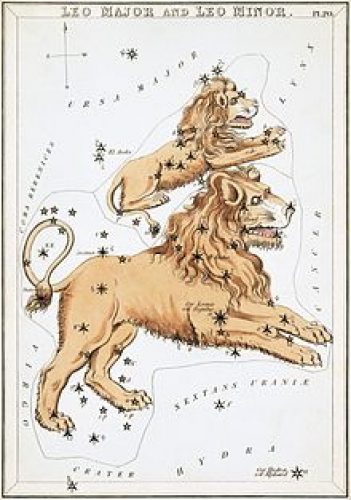 Regulus is from Latin meaning prince or little king. It is the 21st brightest star with an apparent magnitude of +1.35. The distance from earth is 79 light years. It is a double star with the bigger around 80 times the size of the sun. Regulus marks the front legs of the lion.

Algieba is from Arabic meaning ‘forehead’. It is the 49th brightest star with an apparent magnitude of +2.00. The distance from earth is approximately 130 light years. It is a double star, the bigger of which is 32,400 times the size of the sun. Despite its name origin Algieba marks the shoulder of the lion.

Denebola which is shortened from the Arabic phrase Deneb Alasad which means ‘tail of the lion’. It is the 62st brightest star with an apparent magnitude of +2.14. The distance from earth is 36 light years. It is 5 times bigger than the sun. Denebola marks the tail of the lion.

Zosma is from Greek meaning ‘girdle’ refering to the stars location at the hips of the lion. It is the 96th brightest star with an apparent magnitude of +2.56. The distance from earth is approximately 58 light years. The star is around 10 times bigger than the sun. Zosma marks the hips of the lion.

Algenubi is from Arabic meaning ‘south’. It is the 167th brightest star with an apparent magnitude of +2.98. The distance from earth is approximately 247 light years. The star is over 9200 times the size of the sun. Algenubi marks the nose of the lion.

Chertan derives from the Arabic Al Kharatan meaning ‘two small ribs’. It is the 243rd brightest star with an apparent magnitude of +3.33. The distance from earth is approximately 165 light years. It is a relatively young star of only 550 million years – 90% less than the sun. Chertan marks the back legs of the lion.

Adhafera is from Arabic meaning ‘braid’. It is the 269th brightest star with an apparent magnitude of +3.43. The distance from earth is approximately 274 light years. The star is over 215 times the size of the sun. The Arabic word which lends it name to the star refers to curled hair and is in reference to the lions mane. Adhafera marks the neck of the lion.

The Leo Ring – A large gas cloud in a ring shape that is the result of 2 colliding galaxies.