Orion is prominent in ancient mythology, originally a significant character of Babylon. Orion’s belt, which is an easily identified asterism, is used for navigation and identifying other stars. The Orion constellation highlights an interesting observation into the distance of the stars from earth. Despite having 7 of the 70 brightest stars in this constellation, none of the light originated in your lifetime. The nearest star of those 7 is 245 light years away while all others are over 600 light years away. Therefore, the light you see in each of these stars originates from before Copernicus discovered the sun to be the centre of our solar system.

The Orion Constellation is one of the original 48 constellations listed by the Egyptian mathematician Ptolemy, who lived under Roman rule in Alexandria in the 2nd century. These constellations formed the basis for the modern list agreed by the IAU. Constellations from the Southern hemisphere, unable to be seen from the Mediterranean, represent the majority of the additions to the list. 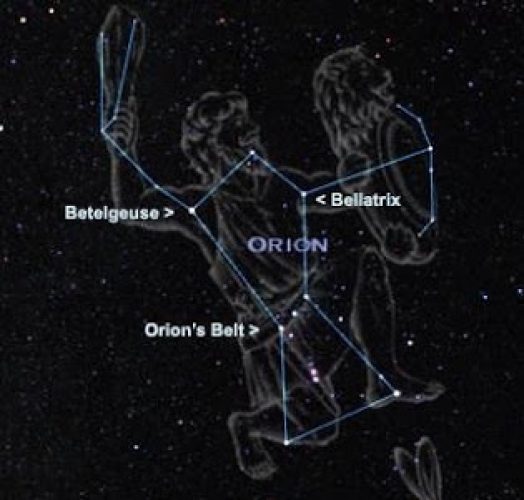 Which months can you see Orion Constellation?

Orion is visible in the night sky from August to April. Orion lies between 10 degrees south and 20 degrees north latitude. Therefore the higher your latitude the shorter your opportunity to see Orion and the lower it will pass in the sky.

Orion is not possible to see throughout summer, as it passes in the daytime sky. At its maximum range it is possible to see at latitudes between +60 and -90. However, the lower latitudes will have visibility for longer periods of the year.

August: rises in south east sky at 03:00 and reaches 40 degrees above south east horizon by sunrise

September: rises in south east sky at 01:00 and reaches 60 degrees above the south horizon by sunrise

November: rises in south east sky at 20:30 and reaches its peak 60 degrees above the southern horizon at 01:00. It will then lower in the south west sky until it begins to be only partially visible from 05:30.

December: rises in south east sky at 18:30 and reaches its peak 60 degrees above the southern horizon at 23:00. It will then lower in the south west sky until it begins to be only partially visible from 04:00.

March: visible 50 degrees above the southern horizon at sunset. It will then lower in the south west sky until it begins to be only partially visible from 23:00.

April: visible 30 degrees above the south west horizon at sunset. It will then lower in the south west sky until it begins to be only partially visible from 22:00.

Not the right time for Gemini? Have a look what constellations you can see tonight. 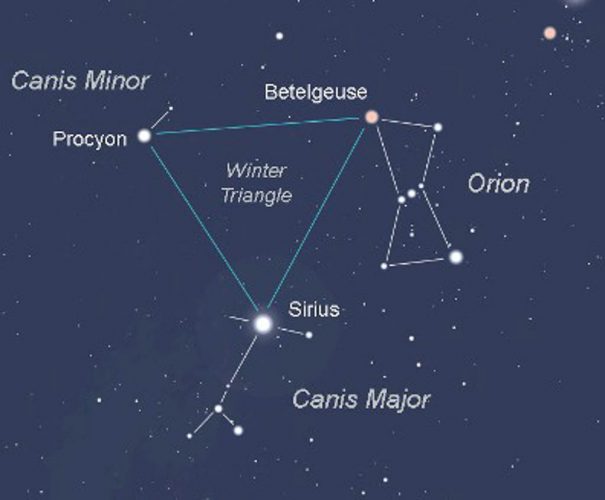 How to find Orion constellation?

There are 3 bright stars near to each other in a straight line forming Orion’s belt. This is one of the most recognisable star formations in the night sky. These 3 stars can also be known as the 3 kings or the 3 sisters. This asterism is among the most obvious and is a starting point for finding many other constellations.

STEP 1: Ensure Orion’s belt is present in the night sky

STEP 2: Identify the area of sky for Orion’s belt

Orion’s belt and the entire Orion constellation should pass through the sky each night from east to west during summer. The hours will vary as per step 1. The angle Orion’s belt will pass you will be the angle of your latitude down from overhead and in the southern sky. As an example if you were at the equator it would pass directly overhead, if you are in London or New York or similar latitudes it will pass half way between the horizon and overhead in the southern sky – around 45 degrees. The higher your latitude the lower it will pass in the sky and vice versa. Now combined with the knowledge in step 1 and step 2 you should have an idea of what area of the sky you will find Orion’s belt.

If you want to try your luck and skip all the interpretations of your location and time of year just search for 3 close bright stars in a straight line in the south sky (north sky for anyone in the southern hemisphere). As you can never see more than half of the stars from any point on earth and all 3 stars are among the 70 brightest visible from earth, they are very noteworthy because of their proximity to each other and straight line they form.

Orion’s belt has a sword or dagger hanging from it so this becomes a useful guide to understand which way is the top of Orion and which is the bottom. The sword known as Orion’s Nebula in celestial terminology and appears as a white area rather than point of light. There are some other stars above it that make it appear long and narrow. The sword faces south. The head of Orion points towards the north star. The belt sits on an angle so does not point east- west. Instead the angle of the belt is around 45 degrees and points northeast-southwest.

Other stars that help to find Orion

Betelgeuse marks the shoulder of Orion and Rigel marks a foot. With the belt clearly apparent between these stars you have a good starting point to tracing the outline of Orion.

Learn how to form the shape of Orion Constellation

To find the shape of the Orion Constellation you can start by identifying the hour glass shape of his body.

The body of Orion

Orion’s body is the easiest to identify, with the 8 brightest stars in the constellation marking the extremities.

Additionally there is a bright Nebula and 2 lesser stars that are part of the body of Orion.

The Club of Orion

Orion’s club is held in his right (western) hand and is marked by 4 stars:

The Bow of Orion

Orion’s bow is held in his left (eastern) hand and is marked by 9 stars curved in the shape of the bow. The bow is parallel to his body and is slightly further from Orion than the width of his shoulders. The midpoint of the bow is shoulder height and the bow spans from his hip height to slightly above his head. 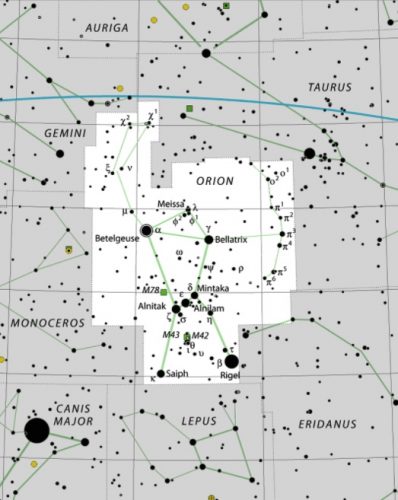 Orion in the Ancient World

There are a variety of stories related to Orion from Greek mythology. Legends related to Orion were shared by spoken stories, with the earliest written record referencing Orion is in Homer’s Odyssey. It is thought that the poem was passed on for several centuries through oral tradition before it was first written in the 6th century BC.

Although there area a variety of conflicting stories, tales of Orion in mythology, revolve around him being the greatest hunter to ever exist. He was said to carry a solid bronze club and be capable of hunting any wild animal. Orion was a prominent figure of Greek legends similar to Hercules and many stories came to reference him as the archetype of the great huntsmen.

According to the Hesiod, Orion is the son of Poseidon. As the son of Poseidon he could walk on water and crossed the sea to the island of Chios. After becoming drunk and assaulting the king’s daughter, he was blinded as punishment. He travelled to Helios the sun god and had his sight returned. Later when hunting with Artemis, the Greek goddess of hunting he claimed he would hunt every animal on earth. Gaia, the god of the earth then sent a giant scorpion to kill Orion to prevent him from killing all the animals of earth.

Several constellations adjacent to Orion have come to incorporate a narrative that ties these constellations together. Both Canis Minor and Canis Major are said to be Orion’s hunting companions. The hare is said to be pursued by his dogs on a hunt. The bull of Taurus is said to be in battle with Orion. Orion is said to have been killed by the sting of a giant scorpion, and Scorpius is the stellar representative of this scorpion. 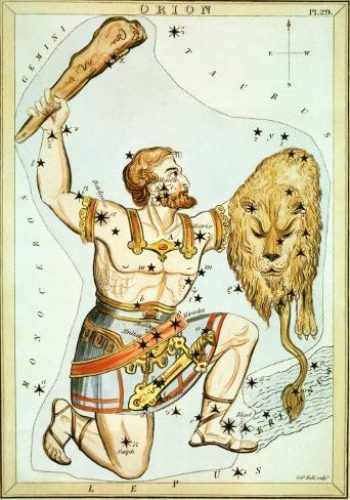 Rigel from Arabic word for ‘left foot’ is the 7th brightest star visible from earth with an apparent magnitude of +0.18. The star is 772 light years from earth. It is a blue supergiant 2 million times the size of the sun. Rigel forms part of the winter hexagon asterism. Rigel marks Orion’s left foot.

Betelguese from Arabic for ‘armpit of Jauzah’ is the 10th brightest star visible from earth with an apparent magnitude of +0.42. Betelguese is 624 light years from earth. It is a red supergiant almost 2 billion times the size of the sun. Betelguese is among the largest stars visible to the naked eye and if it were in the location of the sun would engulf Earth as well as Mercury, Venus and Mars. The name Jauzah was the Arabic name for the hunter Orion. Betelguese forms part of the winter triangle. Betelguese marks the right shoulder of Orion.

Bellatrix from Latin for ‘female warrior’ is the 26th brightest star visible from earth with an apparent magnitude of +1.64. The star is 245 light years from earth. It is 800 times the size of the sun. Bellatrix marks the left shoulder of Orion.

Alnilam from Arabic for ‘string of” is the 29th brightest star visible from earth with an apparent magnitude of +1.69. The star is 1342 light years from earth. It is 140,000 times the size of the sun. Combines with Alnitak and Mintaka to form the Orion’s belt stars. Alnilam marks the central belt buckle of Orion.

Alnitak from the Arabic for ‘girdle’ is the 33rd brightest star visible from earth with an apparent magnitude of +1.88. The star is 800 light years from earth. It is a triple star system led by a blue supergiant 33,000 times the size of the sun. Combines with Alnilam and Mintaka to form the Orion’s belt stars. Alnitak marks the western end of Orion’s belt and his right hip.

Saiph from the Arabic for ‘sword’ is the 59th brightest star visible from earth with an apparent magnitude of +2.07. The star is 650 light years from earth. It is 45,000 times the size of the sun. Saiph marks the right foot of Orion.

Mintaka from the Arabic for ‘belt’ is the 67th brightest star visible from earth with an apparent magnitude of +2.2. The star is 916 light years from earth. It is a multi star system led by a giant 19,000 times the size of the sun. Combines with Alnilam and Alnitak to form the Orion’s belt stars. Mintaka marks the eastern end of Orion’s belt and his left hip.

Meissa from Arabic for ‘shining one’ is also known as Heka also from Arabic for ‘white spot’. The star has an apparent magnitude of +3.47 and is 1042 light years from earth. It is a double star system led by a giant 4,200 times the size of the sun. Meissa marks the head of Orion.

Orion’s Nebula – Potentially the best known Nebula which is clearly not a single point of light, visible with the naked eye. Obvious that it is not a star without aides it has an apparent magnitude of +4 at a distance of 1344 light years

Orion Molecular Cloud Complex – Although not visible to the naked eye the cloud complex has a variety of observable objects with even a small telescope.