Burrah Canyon is one of the larger canyon networks in Wadi Rum, located in the north eastern section of the Protected Area. Burrah means fertile ground in Arabic, after the sandy valley floor which was historically used to grow crops. Unlike most of the straight canyons in the area, Burrah snakes its way with twists and turns. The canyon is narrow at its northern end and winds south to where it opens up into the vast valleys to its south.

The canyon is most notable for its natural features and its imposing cliffs. Furthermore there is a Nabataean dam constructed with stones and used throughout time as a water source. It is a designated climbing area, as shown in the map of Wadi Rum. It is a popular option for half day trekking with interesting natural rock formations and many opportunities to shelter from the sun.

The bottom 30 metres of the sandstone cliffs are dark red and rich in iron oxide, forming a variety of jagged shapes. The canyon exhibits the geologic formation of the area with the later post Cambrian deposits above. The white sandstone above is softer and has eroded into rounder shapes. The sandstone mountain which the canyon cuts through is identifiable by its double peak at its western end, the higher of which is particularly pointy for the area.

The shape of the canyon is very interesting as it snakes its way more familiar to rivers found in flatter meadows. The winding valley offers a variety of coves and crevices inviting exploration. We particularly enjoy Burrah as it is more quiet than other tourist sites in Wadi Rum!

The canyon is only a few metres wide at its northern end. Although constantly fluctuating, it remains around 20 metres wide throughout. There are a number of short crevices and passages to explore off the main canyon pass. These provide comfortable picnic opportunities as you pass through. The valley is known to be very windy during winter but provides shade throughout the day as the canyon is winding its way through the sandstone mountain.

To walk through takes 2 hours, however with a number of detours available it can be explored for longer. It is near Lawrence’s House and Mushroom Rock to its south to combine sites on a custom itinerary. The GPS coordinates are 29.567184, 35.490099 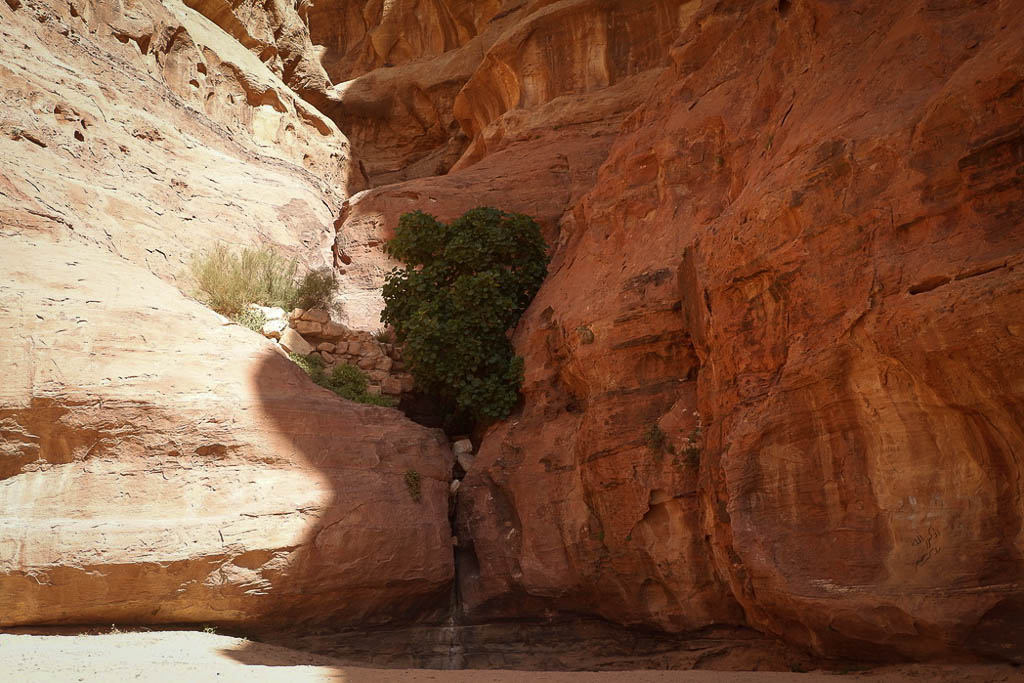