The Nabataean Temple in Wadi Rum was dedicated to the goddess Allat and discovered in 1930. The site was significantly damaged in 1995 and only ruins of the foundational sandstone blocks are visible. Thamudic inscriptions reference the temples construction in the first century AD in honour of Allat. Later Latin inscriptions from the 3rd century AD show that the temple was still in use by the Romans long after their annexation.

The temple is only steps away from the Rest House in Wadi Rum village. The ancient Nabataean Temple exhibits the rich human history, highlighting the two-thousand year old civilization best known for their rock-hewn tombs in Petra. When you walk the dusty path towards the ruins it is easy to imagine the presence of a once-great people buried beneath your feet. The ruins themselves blend modestly into the yellow sand here. Emerging in toppled columns and pitted baths in the shadow of a great mountain.

The Nabataean Temple is significant because it proves that the Nabataean Kingdom established a permanent settlement in Wadi Rum as early as the first century BC. By maintaining control over strategic locations along ancient trading routes, the Nabataeans went from a position of obscurity to one of power. Eventually they went on to construct one of the New Seven Wonders of the World in Petra.

Though Wadi Rum’s Nabataean Temple cannot compare in scale to Petra, it is still worth visiting.  The ruins in this distant valley provide insight into the desert trading culture of the kingdom. Lawrence’s house offers another Nabataean site as it was used as a checkpoint for passing caravans and to ensure security along the route. Use your imagination to appreciate the ancient pillar that form the core of the structure and clamber over sandstone blocks to revere a long-forgotten deity. The goddess Allat, with origins in pre-Islamic traditions, represents the trinity of higher goddess daughters. This structure is central in all Arabian peninsula polytheism. Observance of a supreme male god with three daughters as the primary gods below him is synonymous across the region, that later developed the most major monotheistic religions. She was later associated with the Greek goddess Athena, and the Roman goddess Minerva. 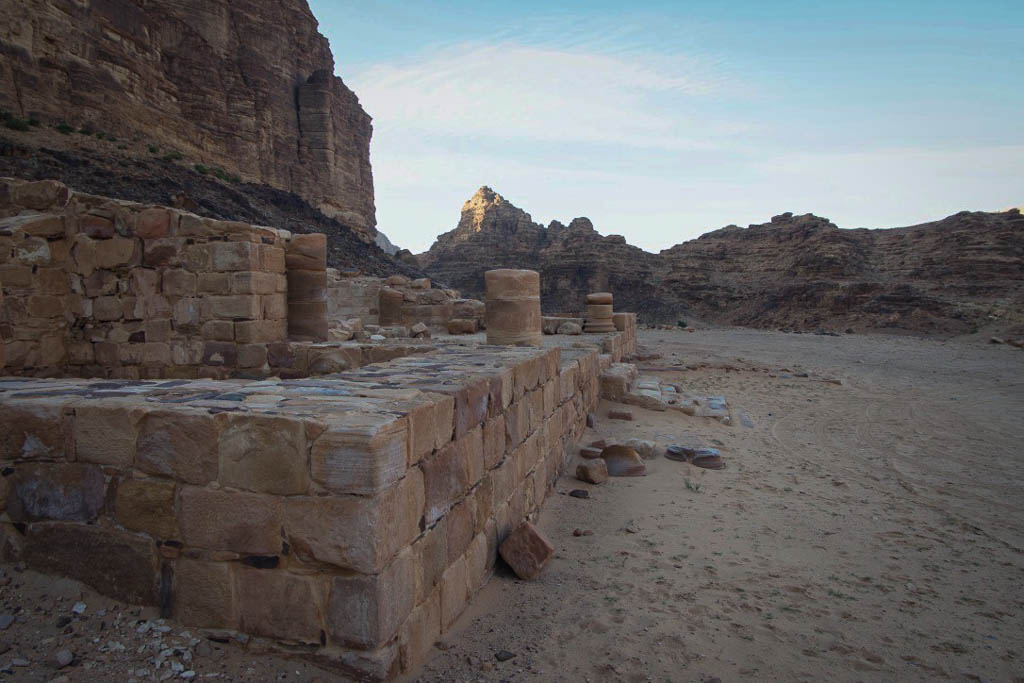 Just a few metres from the temple is another impressive site: the oldest baths discovered in Jordan. Deep cisterns preserved below ground in a maze of walls and luxurious tubs indicate that the Nabateans were innovative engineers. They had methods of transporting and storing the water that flowed from the spring above within the overlooking cliffs of Jebel Rum. One of the two springs that the Nabataean channelled water, Al Shallaleh remains a prominent water source until modern day. However both the aquaducts and cisterns have had their materials removed over the centuries. There is little evidence remaining of the hydraulic systems.

As a culture that made great advancements in these inhospitable lands, we cherish the Nabataeans. Here, in the ruins of where they once worshiped, bathed, and lived, an intrepid traveller can still feel their presence. As you stand at the site overlooking the modern village life of Wadi Rum you gain an appreciation for the patchwork history of the peoples of this valley.

All visitors to Wadi Rum arrive and subsequently depart from the Wadi Rum Rest House. From there the temple is easily accessed by foot, and is therefore not included in any tours. There is a trail that leads to the temple behind the Wadi Rum Rest House. Guests can visit this location if they arrive early, otherwise at the end of their visit to Wadi Rum. The GPS coordinates are 29.577886N, 35.41461E.