Wadi Rum Protected Area is located in the South-East of Jordan along the border with Saudi Arabia. For most visitors, focus is on the sandstone outcrops and cliff formations which the region is famed for. Valleys of varied widths separate the sandstone formations, each with large alluvial sand deposits. There are two distinct types of soft sandstone:

2. Fine white quartz sand compound that has a white, yellow colour. It is softer and forms rounder rolling formations.

The soft sandstone is quickly eroded by sand and water. In the north of the Protected Area, the ‘red desert‘ has interesting natural formations including gorges, natural archways and honeycombing effects in the cliffs. The southern ‘white desert‘ provides stunning scenery, where vast open spaces with complex layering offer picturesque views.

How was Wadi Rum formed?

The formation of Wadi Rum took place in 6 significant stages:

In geologic terms, Wadi Rum landscape is known as a Pre-Cambrian Peneplain. The term peneplain refers to the process of erosion to uncover earlier surface layers. The Cambrian period spanning from ~540 to 485mya occurred between 2 separate ice ages. During the Cambrian period there was little to no permanent ice, sea levels rose significantly, with much of the landmass predominantly submerged. At this time land vegetation had not yet evolved and all life was aquatic.

The period of increased sea coverage created vast areas of shallow seas where sunlight could penetrate to the sea floor. Photosynthesis allowed marine algae to proliferate, resulting in an expansion of underwater vegetation in shallow waters. The process led to oxygen levels on the planet reaching levels significantly higher than ever before on earth. The first time they reached the levels we experience today. This may have directly been responsible for what is known as the ‘Cambrian Explosion’ where significant numbers of new fossil records appeared for the first time, predominantly in the form of marine shell life. Fossilised marine life can be found scattered throughout the Protected Area from this period.

During the Cambrian period sand deposits were carried by rivers from the African plate north into the large sea of which Jordan was submerged along the shoreline. The metamorphic pre-Cambrian bedrock was almost flat, allowing the sedimentary deposits from the southern landmass to deposit in Wadi Rum. The quartz sand eroded from the Gondwana continent to the south in what is now Egypt and Sudan. The north formed a large sea whose currents kept the deposits close to the shore.

During the Cambrian period 30 metres of sand quartz was deposited, determined by the aquatic fossil records. A further 200 metres of sand was deposited in the following periods including the Ordovician ice age. Aquatic worms lived in the sand forming vertical burrows which remain a feature of the sandstone. These vertical faults contribute to the honeycombing texture that is synonymous with the area. 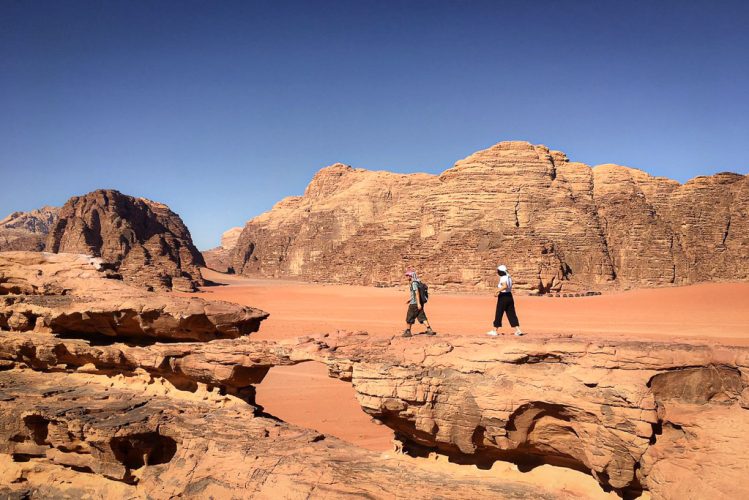 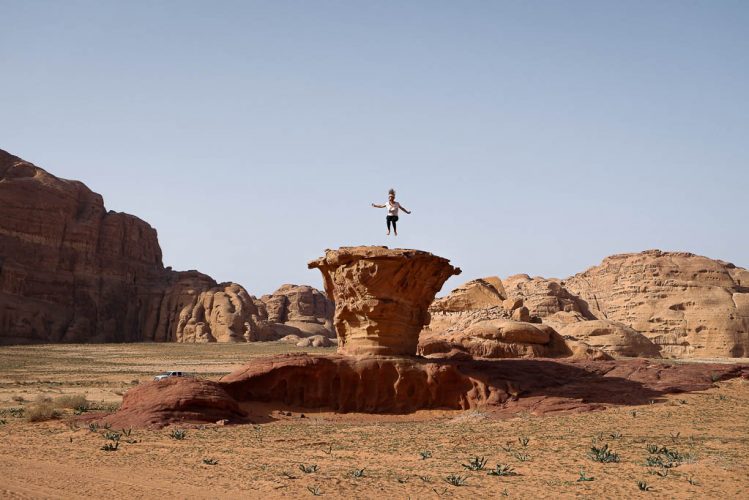 Beneath the sandstone there is various examples of granite basement rock. It is visible as predominantly darker but also lighter rock throughout the Protected Area. The ancient surface of metamorphic formations remaining from the Rodinia continent (1.1bya-750mya) is exposed at the Cambrian sandstone’s base. These granite formations can be better observed in southern part of Wadi Araba, further west in the Jordan Valley. In that area the uplift and resulting rift has exposed more early rock layers.

The darker granite formations are caused by acidic deposits of predominant quartz while the lighter formations are alkaline deposits of predominantly feldspar. The erosion that has occurred since the Cambrian period is mostly physical from wind and water. There is little chemical decomposition occurring in the arid climates, therefore offering good examples of Rodinia era metamorphic rock.

Online there are sources with more detailed explanations of the geology of the region:

John H. Powell from the British Geological Survey published a document covering the geological forms specific to Wadi Rum that exist across Jordan. The document is supported by helpful depictions to understand the processes.

Bandel and Salameh provide an extensive, detailed and technical explanation of Jordan’s geological formation over the past 500 million years

A Hashemite University led paper provide a concise yet comprehensive analysis of the sedimentation of the area. This document also includes a good map on its penultimate page, representing the relevant location of Wadi Rum and the prevailing water levels at the end of the Cambrian period.

University of Jordan published a journal discussing the formation of the Petra Siq. It explains many of the processes that are similarly relevant to Wadi Rum.

There is a comprehensive text explaining the geology of the wider Arabian peninsula: Arabian Deserts: Nature, Origin and Evolution – H. Stewart Edgell