Auriga represents the ‘charioteer’ as in one who rides a chariot, if often depicted a the helmet of a charioteer such as those in the film Ben Hur. It is a lesser known constellation, however is prominent in its position in the northern hemisphere sky including the 6th brightest star Capella. The constellation is above 30 degrees north latitude and is visible at some time in the night 11 months of the year excluding June.

The Auriga constellation is one of the original 48 constellations listed by the Egyptian mathematician Ptolemy, who lived under Roman rule in Alexandria in the 2nd century. These constellations formed the basis for the modern list agreed by the IAU. Constellations from the southern hemisphere, unable to be seen from the Mediterranean, represent the majority of additions to the list.

Primary stars: 7 (6 in a hexagonal shape outlining the face of the helmet and 1 representing the stylised crest as is common on high ranking roman military helmets) 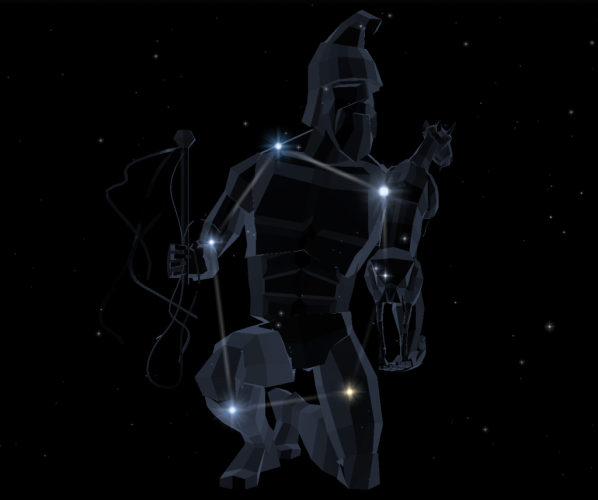 Which months can you see Auriga constellation?

Auriga can be seen in from July to May but can be found high in the sky at 21:00 during January:

As time passes the constellation will gradually appear earlier in the day with ranges below showing the window of opportunity in each month. Auriga sits between 30-55 degrees north latitude. Therefore, the further south your position the further north it will appear in the sky. At its maximum range it is possible to see Gemini at latitudes between +90 and -30.

July: rises 03:00 in the east sky and reaches 45 degrees above horizon at sunrise

August: rises 24:30 and reaches 45 degrees above horizon at sunrise

September: rises 22:30 and reaches 60 degrees above horizon at sunrise

November: above the eastern horizon at sunset and 45 degrees in the western sky at sunrise reaching its peak at 01:00

January: 45 degrees above the eastern horizon at sunset and sets at 04:00 reaching its peak at 21:00

February: 70 degrees above the eastern horizon at sunset and sets at 02:00 reaching its peak at 19:00

March: appear overhead at sunset and sets at 01:00

April: 50 degrees above western horizon at sunset and sets at 24:00

May: 25 degrees above western horizon at sunset and sets at 22:00

Not the right time for Auriga? Have a look what constellations you can see tonight. 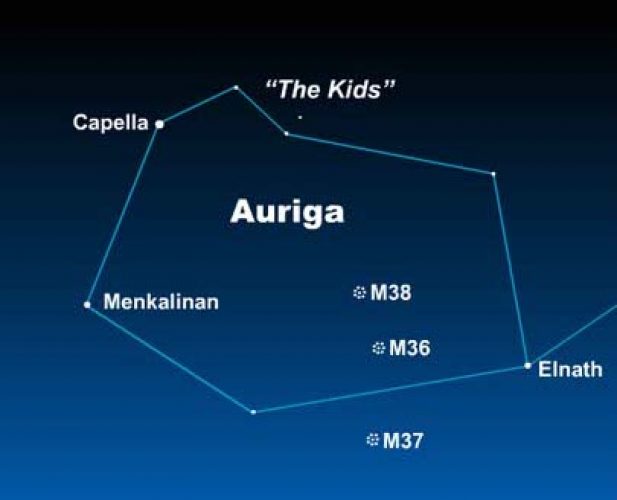 How to find Auriga constellation?

The starting point for identifying Auriga is to identify Capella, the 6th brightest night star from earth. Capella is part of the winter hexagon asterism and a recognisable star in its own right.

There are several different stars that are used as pointers to identify Auriga. If you are already familiar with one of the constellations below then it is best to utilise that method. For those unfamiliar with the neighbouring stars, then it is best to use Ursa Major as it is visible throughout the year in the northern hemisphere. If Orion is visible you may prefer to use it as it acts a reference point for almost all winter constellations.

Big Dipper is visible year round in the northern hemisphere and therefore acts as the best reference point for locating Auriga. Once you have identified the saucepan shape or the big dipper, whichever name you prefer. Follow the direction of the pan moving away from the handle end. The 2 stars that reprensent the top of the pan point directly at Auriga to the south west. If you move 5 lengths of the handle of the saucepan towards the south east you should locate the bright star of Capella.

Orion the best recognised winter constellation is directly south of Auriga. Orion is standing upright with his head point north and his feet pointed south. Once you have identified the hourglass shape of Orion you can search directly north double the height of his body to find Capella

Auriga is conveniently located between 3 of the best known formations in the sky. Cassiopeia which is visible year round inthe northern hemisphere provides another pointer towards Auriga. The well known ‘W’ shape of Cassiopeia provides direction with the second part of the ‘W’ or the first upward stroke of the ‘W’ pointing towards Capella. If that line is followed south east 3 times the full length of Cassiopeia you will locate Capella.

If you already identified the Winter Hexagon then you have found the brightest star in Auriga. Capella connects stars in Gemini and Taurus.

If you already identified Taurus then you have found one of the stars of Auriga at the tip of the bulls left horn (right from viewers perspective) is shared between constellations and forms part of the helmet. It is specified in the sequence below and as the formation of the helmet is a hexagon the loop can be made in either direction.

Learn how to form the shape of Auriga constellation

The starting point for identifying the shape of Auriga always begins with Capella, the nights 6th brightest star. The star marks the top right corner of the helmet from the viewers perspective. The formation is a hexagonal shaped helmet with a single star above signifying the roman military crest of the charioteer 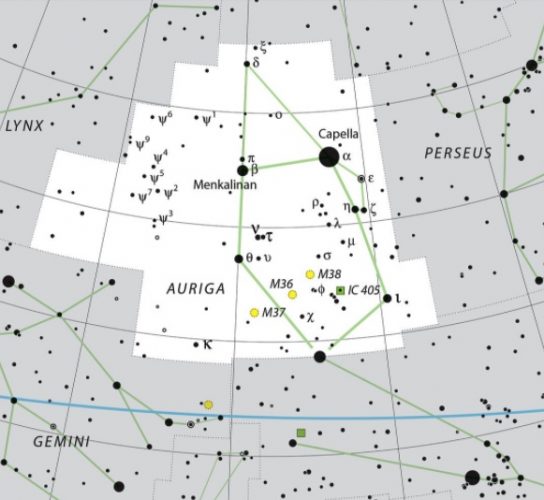 Auriga in the Ancient World

Auriga represents the inventor of the 4 horse chariot popular in the ancient world by the name of Erichthonius. He is said to have invested the chariot and then used it to defeat his rival to become king of Athens. He had been raised by the godess Athena and served her and the city of Athens throughout his life and as recognition was granted a place in the stars by Zeus.

Records prior to Ptolemy show that Auriga was 2 seperate constellations. One of a goat and 3 kids and another of a charioteer. This explains why most depictions of Auriga include goats in the location of Capella the ‘goat star’. 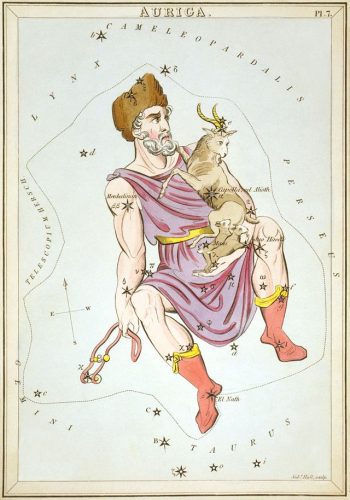 Capella is a Latin diminutive word for a female goat. It is the 6th brightest star with an apparent magnitude of +0.08. The distance from earth is 43 light years. It is a 4 star system with 2 pairings orbiting each other with the larger pairing each around 2.5 times the size of the sun. Documentation of the star with the name ‘goat star’ has been found across a number of ancient cultures. The name of Capella explains why many astronomical visual depictions of the charioteer have him holding a baby goat. Capella marks the upper right corner of the helmet from the viewers perspective.

Elnath named from the Arabic for ‘the butting’ (horns of the bull), as it identifies the tip of the bulls horn. It is the 27th brightest star with an apparent magnitude of +1.66. The distance from earth is 134 light years. It is a blue giant over 300 times bigger than the sun. Rarely it is part of 2 constellations also forming part of the Auriga constellation. Ptolomy originally assigned the star to Auriga however in modern times it has been more associated with Taurus although is recognised in both. Elnath marks the lower left corner of the helmet from the viewers perspective.

Menkalinan is from the Arabic for ‘shoulder of the holder of the reins’ in reference to the horses reins held by the charioteer. It is the 41st brightest star with an apparent magnitude of +1.90. The distance from earth is 81 light years. What appears as a single form of light to the naked eye is a double star system with the larger 20 times the size of the sun. The name of this star reflects man old word depictions of the constellations reflecting a charioteer holding a young goat. Menkalinan marks the upper left corner of the helmet from the viewers perspective.

Hassaleh is unique in that its name has not been connected to any meaning or language. The source of this name was traced as far as Czech astronomer Becvar and the name has been universally accepted despite it having no apparent meaning or origin. An alternate unofficial name Alkab is used meaning the ‘ankle of the holder of the reins’ in line with the full body depiction of the charioteer in the ancient world. It is the 112th brightest stat with an apparent magnitude of +2.69. The distance from earth is 490ly. It is 2 million times the size of the sun. Hassaleh marks the lower right corner of the helmet from the viewers perspective.