The Winter Hexagon is in fact an asterism rather than a constellation. It does not have an official IAU designation and links the 6 brightest stars in each of 6 major constellations.  The 6 stars are among the brightest in the northern hemisphere sky and why this formation is able to be identified despite its coverage of a large section of the sky.

The Winter Hexagon is sometimes referenced as an oval or circle. It links the stars of Rigel (Orion), Sirius (Canis Major), Procyon (Canis Minor), Pollux (Gemini), Capella (Auriga), Aldebaran (Taurus). It is considered one of the easiest formations to identify as it includes 4 of the 8 brightest stars visible from earth as well as Aldebaran at #14 & Pollux at #17.

Primary stars: 6 points of the hexagon 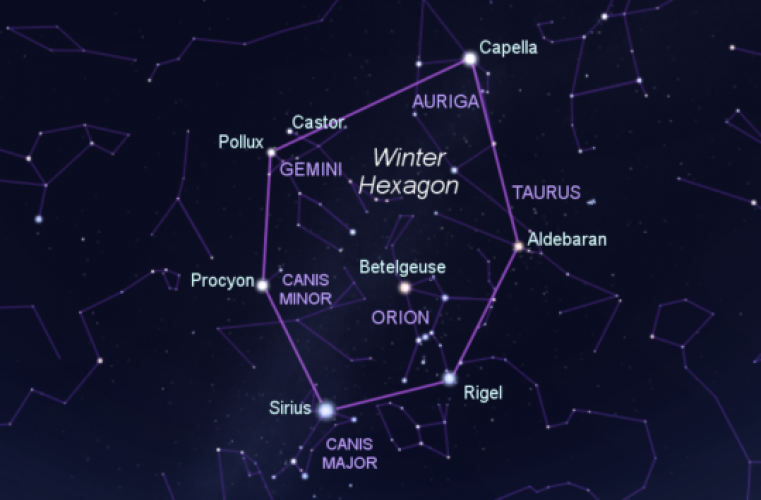 Which months can you see the Winter Hexagon constellation?

As with the winter constellations which it encompasses, it is not possible to see throughout much of the year, as it passes in the daytime sky throughout summer.  Its maximum range where it is possible to see are between latitudes between +90 and -45.

For rising times refer to Taurus

For setting times refer to Canis Minor or Gemini

For Peak times refer to Orion 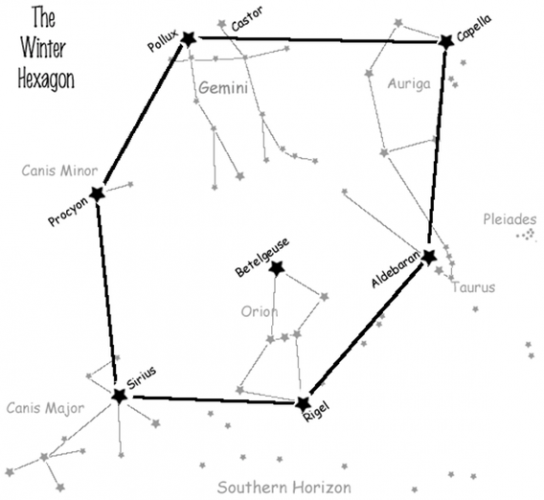 How to find the Winter Hexagon constellation?

As each of the stars within the Winter Hexagon is bright and easily identifiable in its own right you can start from any point to identify its shape. Most commonly Orion is the starting point as it is disguishable because of the belt asterism. However at times when it is partially visible in Spring or Autumn other stars may act as better indicators.

Tracing the shape of the Winter Hexagon

The hexagon is relatively simple to identify as all six stars are similar distances from each other which allows the view to have both a directional reference and distance reference once two initial stars are identified.

This is an extremely useful asterism as in addition to identifying 6 major constellations it provides good directional bearing between these constellations for navigation during winter. 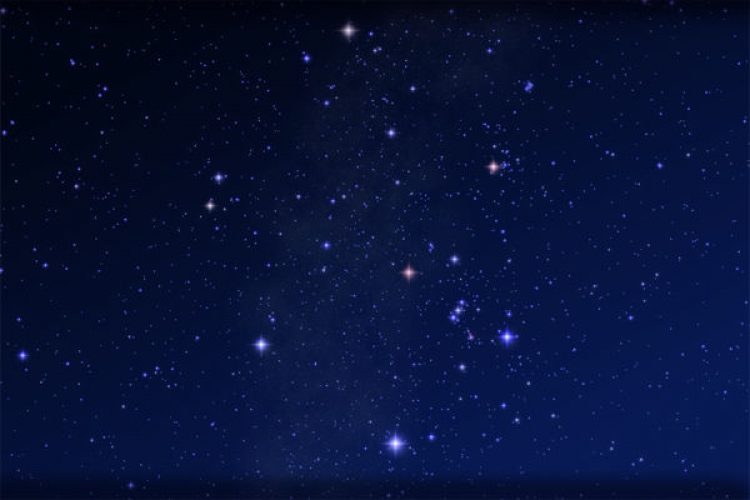 Rigel from Arabic word for ‘left foot’ is the 7th brightest star visible from earth with an apparent magnitude of +0.18. The star is 772 light years from earth. It is a blue supergiant 2 million times the size of the sun. Rigel forms part of the winter hexagon asterism. Rigel marks Orion’s left foot.

Aldebaran named from the Arabic for ‘the follower’ in reference to it following the course of Pleiades. It is the 14th brightest star with an apparent magnitude of +0.86. The distance from earth is 85 light years. It is a red giant, over 350,000 times bigger than the sun. The Hyades cluster is behind it, this small section of the sky is additionally luminated and draws attention to the star making it one of the most recognisable in the winter sky. Aldebaran marks the right eye of the Taurus bull.