The Sagittarius constellation is one of the original 48 constellations listed by the Egyptian mathematician Ptolemy, who lived under Roman rule in Alexandria in the 2nd century. These constellations formed the basis for the modern list agreed by the IAU. Constellations from the southern hemisphere, unable to be seen from the Mediterranean, represent the majority of additions to the list.

Symbolism: Archer or Centaur with a bow

Primary stars: 8 (Primary shape of the constellation is the teapot asterism – 4 stars for the handle, 3 stars for the spout and 1 star for the lid)

Which months can you see Sagittarius constellation?

Sagittarius constellation can be seen from January to November but can be found high in the sky at 21:00 during the month of August:

As time passes the constellation will gradually appear earlier in the night with ranges below showing the window of opportunity in each month. Sagittarius constellation sits between 20 – 35 degrees south latitude. Therefore, the further south your position the further north it will appear in the sky. At its maximum range it is possible to see Sagittarius at latitudes between +55 and -90.

February: breifly visible on the south east horizon before sunrise from 04:30.

April: appear on the south east horizon at 02:00. It will reach 30 degrees above the southern horizon by sunrise.

July: appear on the south east horizon at 20:30, reaching its peak 30 degrees above the southern horizon at 00:00. It will continue moving west until 03:30 when it will begin to be only partially visible on the south west horizon.

October: 30 degrees above the southern horizon at sunset. It will continue moving west until 20:30 when it will begin to be only partially visible on the south west horizon. 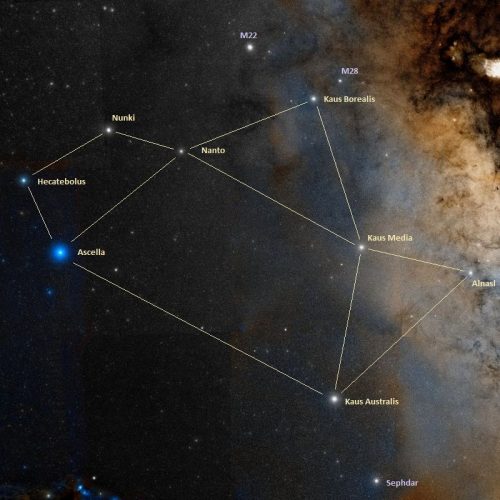 How to find Sagittarius constellation?

Sagittarius is popular as it is the reference for locating the core of the milky way. The milky way core is often referenced as the steam rising from the teapot spout at the centre of the Sagittarius constellation.

The most useful aide in finding Sagittarius is the Milky Way. The Milky Way is prominent in the sky and Sagittarius is at its core. The other two bright formations adjacent to Sagittarius that can be used are the Summer triangle (which covers the constellations of Aquila, Cygnus and Lyra) or Scorpius.

For viewers in the northern hemisphere it passes low across the southern sky. Therefore it is only present in the sky for a shorter duration of the night.

Option 1: Core of the milky way

The constellation of Aquila which forms the shape of an Eagle points directly at Sagittarius. Move away from the Altair and move between one and two lengths of the eagle to find Sagittarius. If you follow the Triangle as it points south you will move slightly west of Sagittarius and can use this to help in identifying its location.

For viewers familiar with Scorpius and trying to locate Sagittarius immediately after it has risen can use the tail of Scorpius. The stinger at the end of the tail of the scorpion is very near to Sagittarius and points at the base of the teapot. If you follow the curve of the tail it will lead y0u directly to the teapot. Follow beyond the stinger double its length to find the star at the base of the teapot  nearest its spout.

Learn how to form the shape of Sagittarius constellation

The primary shape of Sagittarius is the well known teapot asterism. The handle of the teapot points north west and the spout of the teapot faces south east.

Beginning from the tip of the spout which is located in the core of the milky way.

These 8 stars form the prominent teapot asterism and are the main formation within Sagittarius.

Finding the centaur shape imagined by ancient astronomers and explorers:

From the names of the stars and the depictions in ancient texts it can be determined that the bow was formed by the front of the teapot. References to the arrow of Sagittarius aiming for the heart of Scorpius indicates that the spout of the teapot is the arrow.

The handle is said to represent the arm of the centaur tensioning the bow concluded from star names. This gives the viewer a good understanding of the formation initially. 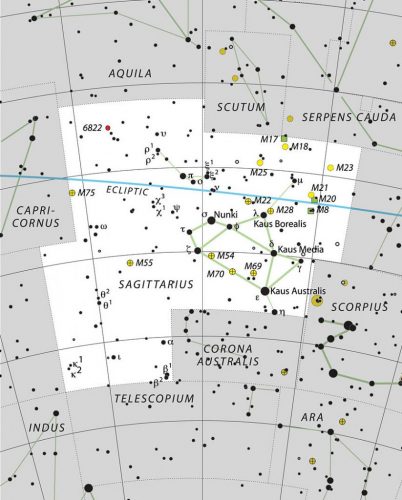 Sagittarius constellation in the Ancient World

Sagittarius was modelled from the Babylonian god Nergal. He was depicted with 2 heads, wings and and the body of different animals. Nergal is attributed as being the sun god in earliest records. Nergal is depicted shooting a flaming arrow and closely related to both the midday sun and fire.

The old testament makes reference to Nergal in 2 Kings 17:30. Many of his attributes were carried to the Persian sun god. Sumerian texts referenced the constellation as the chief ancestor which aligns with many sun dieties who are represented as the god or origin and leader of the gods. Later Nergal became more associated with the war and the underworld and in Greek mythology was associated more with the god of war Ares.

In Greek mythology Sagittarius is associated with the centaur. A half horse, half human creature that was common in Greek myths. Sagittarius is said to represent Chiron, the centaur tasked with protecting and training Jason of the Argonauts. Jason is a prominent figure in Greek mythology for his quest for the golden fleece. Other students of Chiron include Hercules, Archilles and Theseus. Chiron transformed into a centaur to hide from his wife. There are 2 centaurs among the constellations recorded by Ptolemy and Chiron is said to have entered the sky to hide alongside the other centaur already among the stars.

An alternative explanation is that Chiron is represented by the Centaurus constellation and Sagittarius represents Crotus. Crotus was a centaur that the ancient Greeks attributed with the invention of archery. This explains why Sagittarius is always depicted as an archer. 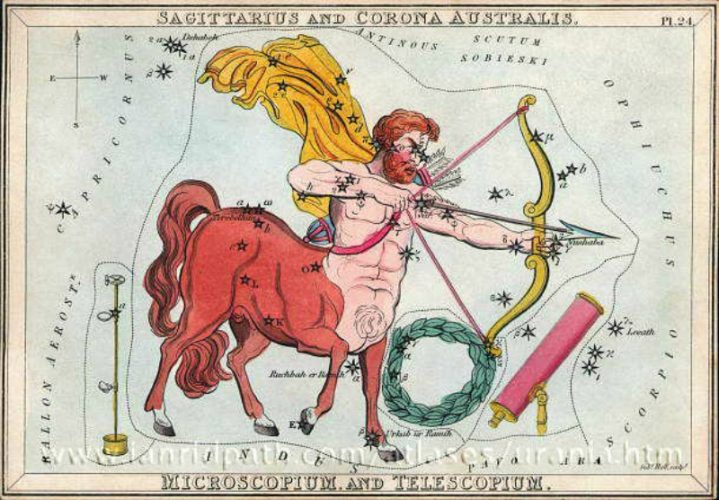 Kaus is from the Arabic for ‘bow’ and Australis is from the Latin for ‘southern’. It is the 37th brightest star with an apparent magnitude of +1.84. The distance from earth is 143 light years. It is a double star system with the primary star more than 300 times the size of the sun. Kaus Australis marks the base of the spout of the teapot.

Nunki is a word of Assyrian or Babylonian origin with unknown meaning. It is the 52nd brightest star with an apparent magnitude of +2.05. The distance from earth is 228 light years. It is around 90 times the size of the sun. Nunki marks the tip of the upper part of the curve of the handle of the teapot.

Ascella is from Latin meaning ‘armpit’. It is the 101st brightest star with an apparent magnitude of +2.60. The distance from earth is 88 light years. It is a triple star system. Ascella marks the where the handle joins the base of the teapot.

Kaus is from the Arabic for ‘bow’ and Media is from the Latin for ‘middle’. It is the 117th brightest star with an apparent magnitude of +2.72. The distance from earth is 348 light years. It is a double star system with the primary star around 4000 times the size of the sun. Kaus Media marks the where the spout connects to the top of the teapot.

Kaus is from the Arabic for ‘bow’ and Borealis is from the Latin for ‘north’. It is the 136th brightest star with an apparent magnitude of +2.82. The distance from earth is 78 light years. It is around 1400 times the size of the sun. Kaus Borealis marks the lid of the teapot

Albaldah is from Arabic meaning ‘the town’. It is the 152nd brightest star with an apparent magnitude of +2.88. The distance from earth is 510 light years. Although it appears as a single source of light, it is a triple star system. Albaldah is north east of the teapot.

Alnasl is from the Arabic for ‘arrow head’. It is the q68th brightest star with an apparent magnitude of +2.98. The distance from earth is 97 light years. It is around1700 times the size of the sun. Alnasl marks the tip of the spout of the teapot.

Large Sagittarius Star Cloud – At the bright innermost core of the milky way, a large star cloud with a group of stars and star clusters.

Small Sagittarius Star Cloud – A secondary bright formation with a heavy concentration of stars allowing over 100o stars to be seen through binoculars.

Lagoon Cluster – A cluster with a pink hue that has a central component known as the hourglass cluster for its unique shape.

Trifid Nebula – Nebula with a blue outer ring and pink interior with a triple star system at its core.

Red Spider Nebula – an X shaped Nebula with a single dominant star at its core.