The ‘Bull of Taurus’ is a well known zodiac constellation that represents the zodiac sign from April 20 – May 20. However the sun passes through the Taurus constellation approximately 1 month later in modern times. Taurus has been a prominent asterism used since the bronze age where it marked the spring equinox.

The Taurus constellation is one of the original 48 constellations listed by the Egyptian mathematician Ptolemy, who lived under Roman rule in Alexandria in the 2nd century. These constellations formed the basis for the modern list agreed by the IAU. Constellations from the southern hemisphere, unable to be seen from the Mediterranean, represent the majority of additions to the list.

Taurus constellation currently marks the first day of spring. Pleiades, which is one of the best known deep sky objects, is part of the constellation. This open cluster, which also goes under the name seven sisters, has been a significant reference with its name shared across the old and new world indicating a significance to early man. Taurus is a prominent constellation that is easy to locate and interpret.

It is important to be aware of the specific time of year and hour of the night when deciding what to look for. These pages below show the constellations in each group so you can find the constellations that interest you. Taurus is best visible in the evening sky in January. 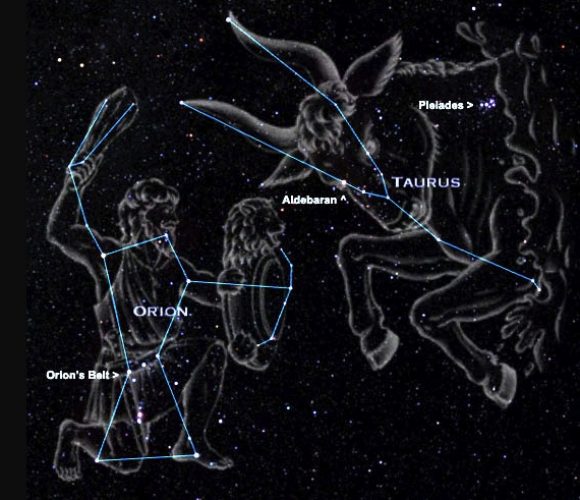 Which months can you see Taurus constellation?

Taurus can be seen from November to January, gradually appearing earlier in the evening and finally only available after dusk in February. Taurus lies between 0-30 degrees southern latitude. Therefore, the further south your position the higher it will appear in the night sky.

Taurus is not possible to see throughout much of the year, as it passes in the daytime sky. As with all zodiac constellations where the sun passes directly through their section of the sky, they are only visible for short periods of the year opposite to their zodiac month. As the zodiacs appear along the perceived equator they are visible in the southern sky from the northern hemisphere and the northern sky from the southern hemisphere. At its maximum range it is possible to see at latitudes between +90 and -60. However, the lower latitudes will have visibility for longer periods of the year.

March: southwest sky at sunset and sets at 22:00

Trajectory: The constellation is between 0-30 degrees north which means that for those in low latitudes of the northern hemisphere is will appear overhead, for those in higher latitudes of the northern hemisphere it will appear in the southern sky. In Wadi Rum the constellation will rise just south of due east and set just south of due west and pass across high in the southern sky.

Not the right time for Taurus? Have a look what constellations you can see tonight. 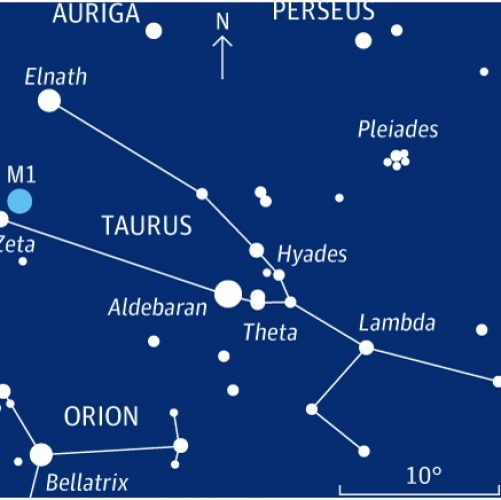 How to find Taurus constellation?

Taurus constellation is visible in the southern sky during winter months for observers in the northern hemisphere. To find Taurus use the Orion’s belt asterism. Taurus is north-east of Orion and if you follow the line of the best you will find the cluster of bright stars that form the face of the bull. If you are also able to identify Sirius in the Canis Major constellation (which is the brightest star in the sky and is east of Orion, you will have a good reference of direction and distance as it is roughly the same distance and direction on the other side of Orion’s belt. The distance from Orion’s belt is approximately 7 times the length of the belt.

The other approach to finding Taurus is with the winter hexagon constellation. If you are aware of this constellation than Aldebaran is in both of these constellations. You can use this as your starting point for the constellation as it is the brightest star.

Similarly either Taurus and Auriga constellations are useful to identify each other as they share the star Elnath. Once you identify the tip of the left horn of Taurus you will be able to locate and identify Auriga. Similarly if you are familiar with Auriga you can use Elnath to subsequently identify Taurus.

Learn how to form the shape of the Taurus constellation

The starting point for identifying the form of Taurus is Aldebaran which is the brightest star and marks the right eye of the bull. Remembering that the right side of the bull is on the left from the viewers perspective. Similarly to when you shake hands with someone you cross over as their right hand is on your left.

There are 5 stars in a ‘V’ shape that form the face, one at each point of the V and 2 at the midpoints between. Orion’s belt again presents a good disance reference. The triangular shape of the face has a diameter of a similar distance. 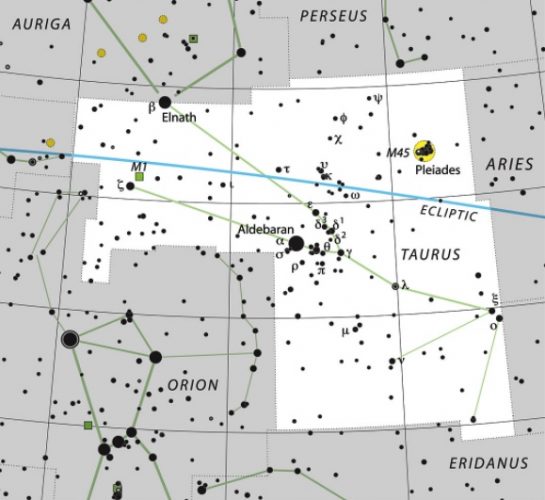 Taurus in the Ancient World

Taurus is one of the zodiac constellations through which the sun passes through annually. Although it is associated with the zodiac month of May and is passed by the sun during June in modern times, in the ancient world the sun passed Taurus during the spring equinox. Therefore it became a significant time for early agricultural societies. The domestication of livestock and use for ploughing added to the significance and the bulls depicted in cave paintings such as those in Lascaux show the reverence with depictions of bulls and the Pleiades star cluster in addition to other astronomical references.

Greek mythology of Zeus and Europa

Taurus is associated with Zeus and a story where he took the form of a bull to seek the attention of Europa. He transformed himself into a handsome white bull and Europa impressed by the animal climbed upon its back. Zeus then ran and eventually swam with her on his back until he reached the island of Crete. There he returned to his natural form and lavished her with gifts until she accepted his advances. Finally connected to a story where Zeus took the form of a bull to seduce Europa and eventually had 3 children including King Minos of Crete. 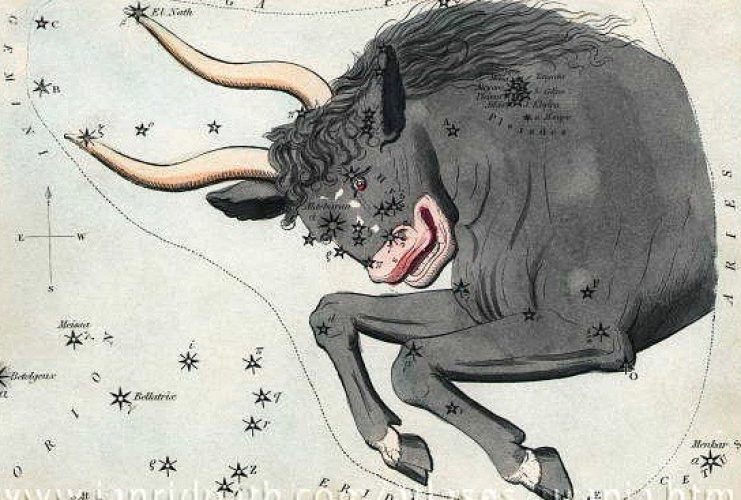 Aldebaran named from the Arabic for ‘the follower’ in reference to it following the course of Pleiades. It is the 14th brightest star with an apparent magnitude of +0.86. The distance from earth is 85 light years. It is a red giant, over 350,000 times bigger than the sun. The Hyades cluster is behind it, this small section of the sky is additionally luminated and draws attention to the star making it one of the most recognisable in the winter sky. Aldebaran marks the right eye of the Taurus bull.

Elnath named from the Arabic for ‘the butting’ (horns of the bull), as it identifies the tip of the bulls horn. It is the 27th brightest star with an apparent magnitude of +1.66. The distance from earth is 134 light years. It is a blue giant over 300 times bigger than the sun. Rarely it is part of 2 constellations also forming part of the Auriga constellation. Ptolomy originally assigned the star to Auriga however in modern times it has been more associated with Taurus although is recognised in both. Elnath marks the tip of the bulls left horn.

Alcyone is the name of a daughter of Atlas from Greek mythology. It is the 143rd brightest stellar source of light in the nights sky with an apparent magnitude of +2.85. The distance from earth is 440 light years. Although the light source from earth appears to be singular it is a small cluster within the greater Pleiadas cluster. The name originates from its reference in early human history as forming part of a group of 7 stars that are associated with the spring equinox. The reference of the seven sisters has been recognised across many ancient cultures although in China it is known as the hairy head. The Greek mythological association is with the seven sisters, known as Pleiadas. Alcyone does not form part of the bull of Taurus and is rather part of the Pleiades cluster which appears directly north west of Taurus.

Messier 45 (Pleiades) – The seven sisters is one of the brightest sources of natural light in the nights sky with a magnitude of 1.6 with the stars at distances between 390 and 460 light years to earth. Alcyone is joined by 6 sisters from greek myth origin Calaeno, Electra, Maia, Merope, Sterope and Taygeta. As well as sea nymph Pleione and Titan Atlas.

Hyades – This is the nearest star cluster to our solar system with Messier 45 being second. It is 153 light years from earth and is in direct line of sight with Aldebaran. Aldebaran is significantly closer to us and is not part of the cluster

Taurid Meteor shower – meteor shower occurring within the section of the sky allocated to the Taurus constellation. Peak in November annually.