Ursa Minor (Small Bear) is a significant constellation in the northern hemisphere because it identifies the north star Polaris. The form of Ursa Minor is best understood when compared to Ursa Major and is also referred to as the little dipper for its likeness. However alone it clearly represents a body with a long tail with Polaris at the tip. The constellation is visible year around in the northern hemisphere and is such considered a circumpolar constellation. All other circumpolar constellations and stars visible in the sky appear to rotate around Polaris and Ursa Minor.

Ursa Minor constellation is one of the original 48 constellations listed by the Egyptian mathematician Ptolemy, who lived under Roman rule in Alexandria in the 2nd century. These constellations formed the basis for the modern list agreed by the IAU. Constellations from the southern hemisphere, unable to be seen from the Mediterranean, represent the majority of additions to the list. 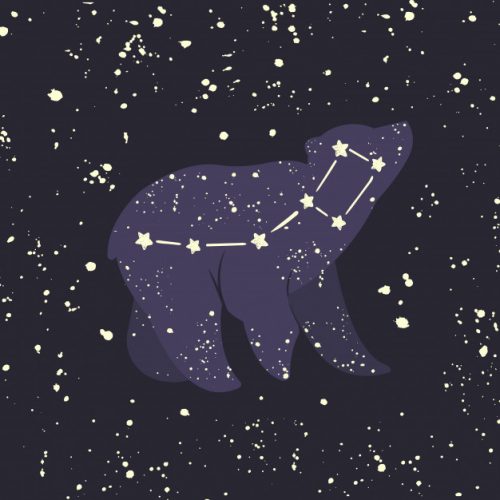 Which months can you see Ursa Minor constellation?

Ursa Minor can be seen all year and its location should remain unchanged. Regardless of your viewing time it will appear above the northern horizon at an angle equal to your latitude. Because its location does not change it is one of the easiest constellations to locate

Present throughout night year round

January to December: Polaris is consistently visible in the same location in the north sky throughout the year. It will appear due north the same degrees above the horizon as the latitude you are viewing from. 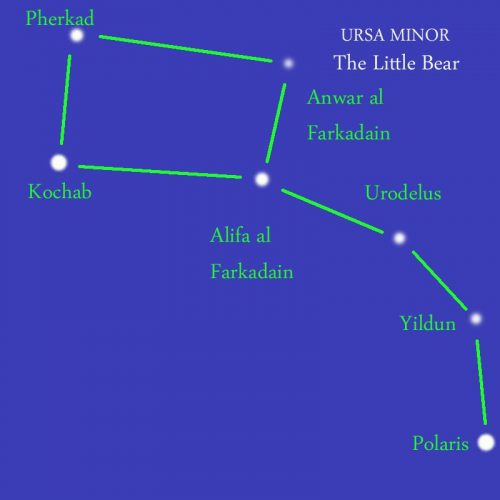 How to find Ursa Minor constellation?

The constellation will always be in the north sky so orient yourself with a clear view of the sky to the north.

As the north star Polaris is present in the Ursa Minor constellation, for those with coordinal reference, you can attempt to directly locate Polaris. It will always appear directly north the same angle above the horizon as your latitude. From here you can identify the form of Ursa Minor.

If you are not able to directly identify Polaris or if you want to confirm its location there are 2 main pointer asterisms that are used by stargazers.

The Big Dipper or saucepan forms part of Ursa Major and and is a recognisable group of 7 bright stars in the north sky. Once you follow the instructions of how to find the Big Dipper you can use those stars to accurately find Polaris. The two stars furthest from the handle form a straight line to Polaris. To locate the north star move 5 times the distance between the 2 stars upward from the saucepan.

Cassiopeia is another north sky constellation that has 5 prominent stars that form the shape of a W. Cassiopeia and the Big Dipper appear on opposite sides of Polaris. Depending on its point in its rotation around Polaris it may appear sideways or upside down as an M shape.

Regardless for consistency imagine it as a W shape and imagine a line between the middle star and the base of the second V or the end of the second downstroke. Follow this line up from the W shape around 6 times the distance between these 2 stars and you should find Polaris

If you  have identified both pointer asterisms it is beneficial to know that Polaris is roughly half way between however it is slightly closer to Cassiopeia.

Learn how to form the shape of Ursa Minor constellation

Now that you have found the north star Polaris you can trace the shape of Ursa Minor. The shape of the small bear is very simple and is often referred to as the small dipper or small saucepan for visual clarity. The next two brightest stars after Polaris are the 2 furthest at the front of the bear away from the tail.

The bear points directly towards Draco and for additional directional references the front of the bear is towards the tail of the big bear and away from Cassiopeia.

Tail of the bear or handle of the small saucepan (straight line with slight curve):

Body of the bear or the pan of the small saucepan (rectangular shape):

Ursa Minor in the Ancient World

Babylon and the Wagon

Roman mythology borrowed the Greek myth of Ursa Minor. Zeus is attracted to a young women named Callisto. Callisto has a son Arcas and Zeus’ wife Hera suspects Zeus is the father. She turns Callisto into a bear so Zeus will no longer be attracted to her. One day Callisto’s son Arcas encounters the bear who is his mother, unaware it is her, he intends to shoot her but Jupiter intervenes by transforming Arcas into a bear also. Callisto is represented by Ursa Major and Arcas by Ursa Minor.

An alternate Greek myth that gets associated with the constellations is the story of two bears who helped Zeus in his infancy. Zeus’ father Chronis (the god of time) had eaten his first 5 children due to the prophecy that he would be overthrown by one of his children. Rhea Zeus’s mother acted to save Zeus and swapped him for a rock that she wrapped in a blanket and Chronis instead eat this. Zeus was then raised by nymphs, giants and other mythical beings. Later he managed to poison his father which caused him to vomit up his 5 siblings. Zeus then led a battle against his father with the support of these 5 to overthrow him as the king of the gods. In explaining the significance of the celestial bears in ancient Greece. it is said that among those who raised Zeus were 2 bears that Zeus later thanked after becoming king of the gods by throwing them among the stars by their tails that were stretched in the process.

Evolution of the North Star

Polaris will remain the north star for our lifetime and for centuries to come. However it has not always been the case, and will again change. Due to the axial tilt of the earth itself rotating (wobbling much like a spinning top) the north star moves through 6 constellations on a cycle that lasts around 26,000 years.

Polaris is a modern name that has been Latinised and refers to the location of the star at the celestial pole. It is the 48th brightest star with an apparent magnitude of +1.99. The distance from earth is 433 light years. It is a triple star system, with a primary star around 50,000 times the size of the sun orbited by 2 stars similar in size to the sun. Although Polaris is currently the north star this changes over time as the axis of the earth wobbles. Polaris will remain the north star for several centuries. Polaris represents the tip of the tail of the bear.

Kochab whose name first appeared during the renaissance in the 16th century. The origin of the name is unclear however it is very near to the Arabic word for star. It is the 57th brightest star with an apparent magnitude of +2.07. The distance from earth is 131 light years. It is 75,000 times the size of the sun. Kochab marks the shoulders and head of the bear.

Phercad is from Arabic meaning ‘calf’ from an Arabic asterism the identied the 2 bright stars in the pan of the small dipper as the two calves. It is the 174th brightest star with an apparent magnitude of +3.00. The distance from earth is 487 light years. It is 3,300 times the size of the sun. Many charts identify the 2 fainter stars as the brighter and dimmer calves although Phercad has the official naming as it is understood the 2 brighter stars formed the correct old world asterism . Phercad marks the chest on the upper part of the underside of the bear.