It’s hard to believe, examining these age-old petroglyphs up close, that some of the etchings at the Anfashieh Inscriptions site were created two-thousand years ago. The patterns cut into the rock resemble the simple drawings of a child—figures with perfectly round heads, stick-like arms, and triangular torsos; camels with skinny necks and exaggerated humps marching in a  two-dimensional procession through rosy stone. They are remarkably preserved, a piece of history captured and frozen in time.

The inscriptions in this area were made by the Thamud and Nabatean peoples, both tribes with a mysterious history. The earliest primary source that speaks of Thamudic presence is an inscription written by Sargon II, an Assyrian king of the 8th century BCE, who describes them as a tribe included in the Assyrian Empire. However, according to Islamic traditions and the later-written Qur’an, the Thamudic people existed earlier than this, warned of the coming judgement of Allah by the prophet Salih. Near to the time of the Prophet Muhammad (around 600 CE) the tribe vanished, whether by volcanic eruption, earthquake, or the foretold wrath of God, is undetermined.

While the Nabatean people are best known for their construction of Petra, the magnificent city hewn out of rose-coloured rock and Jordan’s most visited UNESCO world heritage site, their presence in other parts of Jordan is equally as fascinating. Their origins are as one of the many nomadic tribes that roamed the Arabian desert, emerging from obscurity in around the 4th century BCE. Eventually, this tribe established permanent settlements—the evidence of which can also be seen at the Nabatean temple close to the Wadi Rum Rest House. In this territory, they controlled trade routes vital to the many caravans that travelled between Egypt and Syria, and maintained independence until annexation to the Romans in 106 CE. But even during this period, their kingdom flourished and it was not until the 5th century that their civilization can truly be said to have crumbled after their conversion to Christianity and succession to new invading Arab tribes.

The inscriptions themselves are of great archeological importance, but you do not need to be a historian to appreciate them. Just gazing at the markings made two-thousand years ago is enough to awe and humble any traveller, and the chance to see them is not to be missed.

The Anfashieh inscriptions are explained and detailed as part of the Petroglyph tour, they are also seasonally included in the standard 4×4 tour, and can be incorporated for guests with a specific interest. They are located on the south facing side of Jebel Anfashieh towards Jebel Um Kharg and directly across from the entrance of Rakhabat Canyon.

The GPS coordinates are 29.55591N, 35.452947E. The location is identified on the Wadi Rum tourist map showing the all major attractions. 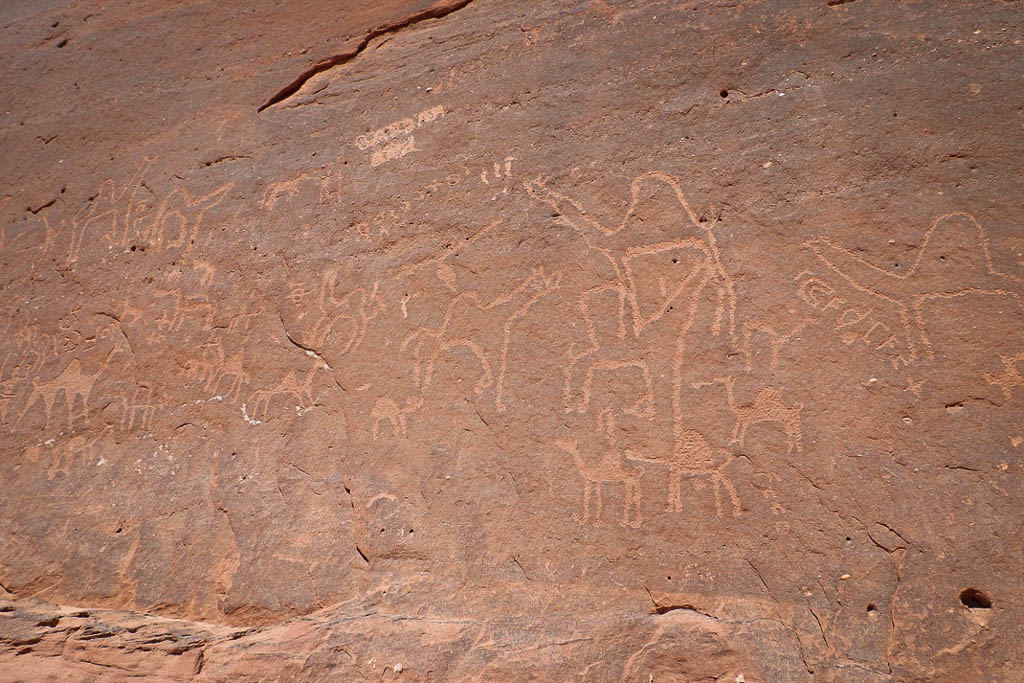