Miraculously, his robes spread out around him and carried him to the ground unharmed. His pursuers interpreted this as an act of God, and so determined to let him live. The thief’s name was Ali, and “Khaz” means jump, making the English translation of this site “The Jump of Ali.”

A narrow passage flanked by two fig trees, Khazali Canyon appears unremarkable from the outside. But squeezing through its entranceway to where the rocks widen you see the inscriptions here that marked the paths of the ancients. Nabatean and Arabic traders rested in this place close to a thousand years ago. They used the towering walls to shade themselves from the intense heat of the desert. You can see drawings of elephants and lions; animals that used to roam with the trading caravans that travelled from Egypt via Petra to Damascus. Prayers carved into the rock show where pilgrims rested on their journey to Mecca. A particularly distinct imprint of two, bare feet signified for travellers where they could find a well for drinking water. Even now, in the hot Jordanian summers, Khazali Canyon provides cool relief for locals and tourists alike in the shadow of its imposing walls. 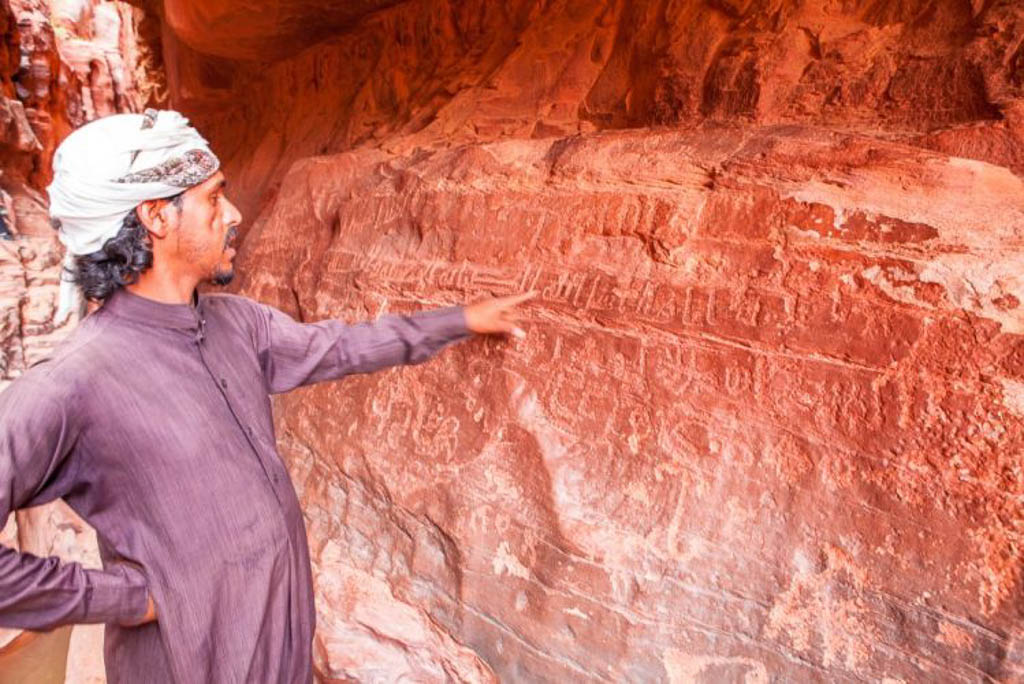 The geological formation of the Canyon formed over millennia from winter floods generating torrents of water that flow through the gorge and create deep basins. The first portion of Khazali canyon is filled with stone age inscriptions and is easy to stroll through. Further in, you reach a section that rapidly steps up into a series of basins and dry waterfalls. It creates a challenging adult playground!

Both the half day and full day 4×4 tours visits Khazali Canyon. It is very popular as it is home to some of the best petroglyphs in the region. It is located 6km south of Wadi Rum Village in the Protected Area at the northern end of Jebel Khazali. Khazali Canyon is less the 4km from Arabian Nights Camp. The GPS Coordinates are 29.520145N, 35.424003E.