Ursa Major (Big Bear) is one of the best known star groupings in the sky as the big dipper (also known as the plough or the saucepan) belongs to this constellation. The Big Dipper forms the tail and the back half of the torso of the big bear. The handle of the saucepan is the tail and the pan forms half of the torso. The constellation is visible year around in the northern hemisphere and is such considered a circumpolar constellation as it appears to rotate around the north star.

Ursa Major constellation is one of the original 48 constellations listed by the Egyptian mathematician Ptolemy, who lived under Roman rule in Alexandria in the 2nd century. These constellations formed the basis for the modern list agreed by the IAU. Constellations from the southern hemisphere, unable to be seen from the Mediterranean, represent the majority of additions to the list.

Primary stars: 16 (7 that form the big dipper/saucepan or the tail and back half of the bear, 4 for the back legs, 2 for the front legs, 2 for the upper body and 1 for the nose) 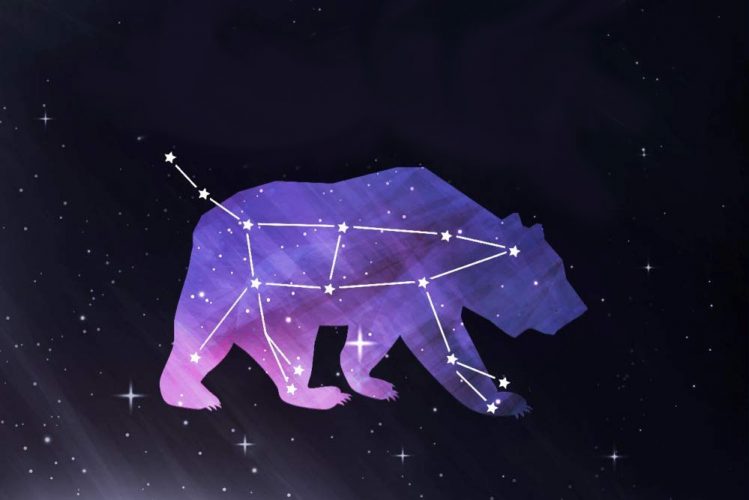 Which months can you see Ursa Major constellation?

Ursa Major can be seen all year but can be found high in the sky at 21:00 from April to June:

As time passes the constellation will gradually appear earlier in the day with ranges below showing the window of opportunity in each month. Ursa Major sits between 30-65 degrees north latitude. Therefore, the further south your position the lower it will appear in the north sky. At its maximum range it is possible to see Ursa Major at latitudes between +90 and -20. Above latitudes of 45 degrees north the constellation remains above the horizon at all times.

Present throughout night from February to May

Best visible at 21:00 from April to June

October: visible after rising from 03:00 in the north east sky and reaches its 30 degrees above horizon by sunrise

November: visible after rising from 24:00 in the north east sky and reaches its 50 degrees above horizon by sunrise

December: visible after rising from 22:00 in the north east sky and reaches its 70 degrees above north horizon by sunrise

Trajectory: The constellation is between 55-65 degrees north, placing it around degrees from Polaris. The constellation will rotate around the northern star maintaining its distance. As such viewers can expect it to follow an arch from the north east horizon arching across the north east sky until it reaches its peak high in the north sky, then following a parallel arch in the north west sky until it reaches near to the north west horizon. Those at very high northern hemisphere latitudes may also be able to view it cross low in the north sky to complete its rotation. Its peak trajectory in Wadi Rum is 70 degrees above the northern horizon and is viewable in the evening from April to June.

Not the right time for Ursa Major? Have a look what constellations you can see tonight. 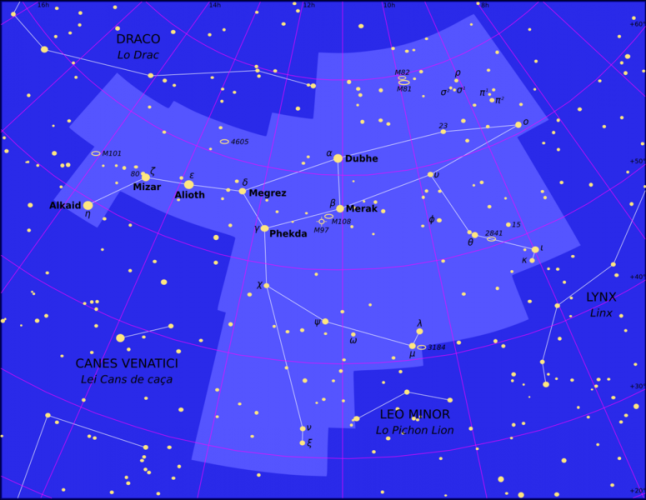 How to find Ursa Major constellation?

How to find the Big Dipper or or to find the saucepan is the first question we need to answer as that will be how we identify the Ursa Major constellation. Fortunately it is considered an easy formation to find because its location is consistent throughout the year.

Step 1: Make sure you are familiar with what time of night the constellation will be in the sky for the time of year you are looking. Use the guide above to confirm the cycles and the appropriate area of the sky

Step 2: The constellation will always be in the north sky so orient yourself with a clear view of the sky to the north

NOTE: All 7 stars in the big dipper are among the 200 brightest visible from earth (including those in the southern hemisphere that you never see and those that pass in the day so they are all very clear

Step 3: First step is to identify the 3 brights stars that form the handle of the saucepan. They are 3 bright stars in a line for which there are not many candidates if you followed the previous steps and are looking at the right time and in the right direction.

Step 4: Once you have identified the handle it is easy to validate if you have correctly located the constellation as the pan is a rectangle extension of the handle to the west.

Learn how to form the shape of Ursa Major constellation

The Big Dipper forms the tail and the back half of the torso of the big bear. These 7 stars are the brightest in the constellation and are critical reference points for identifying the others. To assist with explaining the location of the remaining stars we will confirm the name of each star.

To aid in identifying the shape of the bear it should be understood that the bear is depicted walking on all four legs like a dog. It is also convenient that in this constellations many of the distances are very similar as with the saucepan. Finally the nose and feet although less bright than the big dipper are prominent so the extremeties are easier to recognise.

Identify the 7 stars of the Big Dipper or Saucepan asterism

Finding the 9 other stars that complete the Ursa Major Constellation

Step 1: The remainder of the torso

The front part of the torso is relatively simple to identify with the pan extending out to form an elongated body.

These stars extend the existing rectangle of the pan out into a longer rectangle around double the size to represent the torso of the bear.

Step 4: The back legs

From this star the legs split 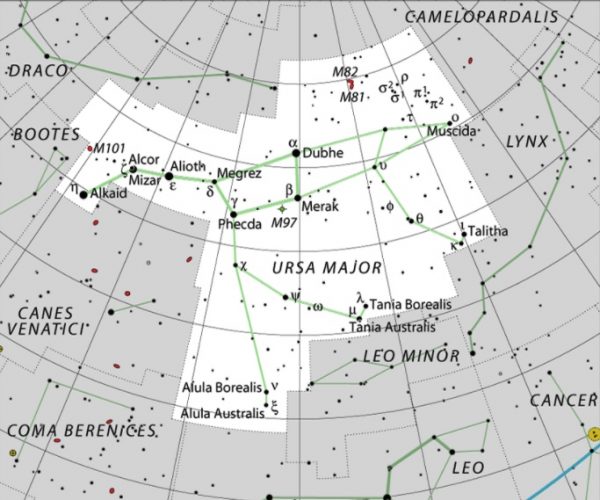 Ursa Major (and Big Dipper) in the Ancient World

The Big Dipper formation was a significant asterism in ancient northern hemisphere societies as it was regularly visible in the night sky and provided clear coordinal direction. Many cultures shared similar hunting myths dating back to 11000BC coinciding with the times of the earliest settled people. These stories vary slightly but all involve a human hunt where the ususally horned herbivorous animal is pursued into the night sky and becomes the big dipper component of the Ursa Major.

Roman mythology borrowed the Greek myth of Ursa Major. Zeus is attracted to a young women named Callisto. Callisto has a son Arcas and Zeus’ wife Hera suspects Zeus is the father. She turns Callisto into a bear so Zeus will no longer be attracted to her. One day Callisto’s son Arcas encounters the bear who is his mother, unaware it is her, he intends to shoot her but Jupiter intervenes by transforming Arcas into a bear also. Callisto is represented by Ursa Major and Arcas by Ursa Minor.

An alternate Greek myth that gets associated with the constellations is the story of two bears who helped Zeus in his infancy. Zeus’ father Chronis (the god of time) had eaten his first 5 children due to the prophecy that he would be overthrown by one of his children. Rhea Zeus’s mother acted to save Zeus and swapped him for a rock that she wrapped in a blanket and Chronis instead eat this. Zeus was then raised by nymphs, giants and other mythical beings. Later he managed to poison his father which caused him to vomit up his 5 siblings. Zeus then led a battle against his father with the support of these 5 to overthrow him as the king of the gods. In explaining the significance of the celestial bears in ancient Greece. it is said that among those who raised Zeus were 2 bears that Zeus later thanked after becoming king of the gods by throwing them among the stars by their tails that were stretched in the process.

In the Arabic world the 3 feet of the bear form their own asterism that is known as the 3 leaps of the gazelle. In Hindu cultures the big dipper is known as the seven sages. Native American cultures referenced the tail as 3 hunters pursuing the giant bear. Many other cultures simply refer to them as the 7 stars of the north sky. 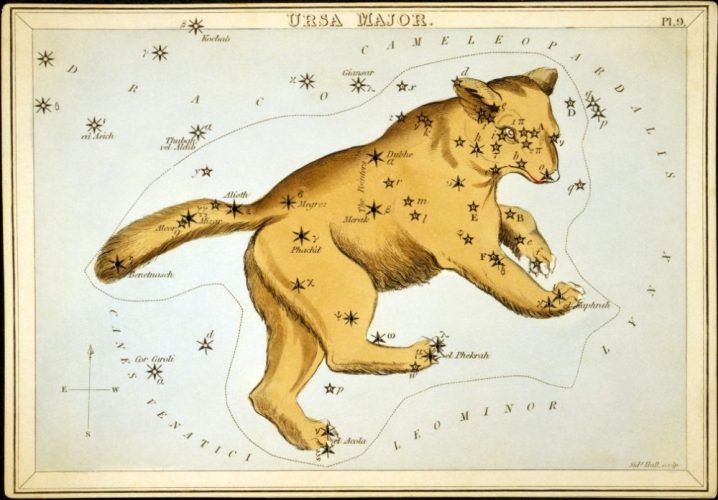 Alioth is from Arabic meaning the ‘fat on the tail of the sheep’. This part of the sheep meat is prized in the middle east and you may notice that local breeds have been selectively bred and have much fattier tails than other parts of the world. It is the 32nd brightest star with an apparent magnitude of +1.76. The distance from earth is 83 light years. It is 70 times the size of the sun. Alioth represents the base of the tail closest to the torso of the star in the handle closest the pan within the Big Dipper asterism.

Dubhe is from Arabic meaning ‘bear’, abbreviated from the full Arabic name which translates to ‘the back of the great bear’. It is the 34th brightest star with an apparent magnitude of +1.79. The distance from earth is 123 light years. It is a double star that orbit each other. Dubhe marks the middle of the bears back as well as the top of the pan furthest the handle in the Big Dipper.

Alkaid is from the Arabic for ‘the leader’ which is peculiar because it in fact follows the rest of the constellation through the sky. It is the 38th brightest star with an apparent magnitude of +1.86. The distance from earth is 104 light years. It is 40 times the size of the sun. The modern name is derived from the longer original name that translates as ‘leader of the mourning daughters’ as the 3 stars in the tail of the bear were known as the mourning daughters. Alkaid marks the tip of the bears tail or the end of the handle of the saucepan

Mizar is from Arabic word for ‘apron’ but is a reference to the name of one of the mourning daughters from the ancient Arabic asterism for the 3 stars in the handle of the saucepan. It is the 69th brightest star with an apparent magnitude of +2.23. The distance from earth is 83 light years. Mizar is a double star with each around 14 times the size of the sun. Mizar marks the middle star in the tail of the bear or the middle star in the handle of the saucepan.

Merak is from Arabic for ‘belly’ (of the bear). It is the 80th brightest star with an apparent magnitude of +2.34. The distance from earth is 80 light years. It is 28 times the size of the sun. Merak marks the midpoint of the underside of the bear or the base of the pan furthest from the handle.

Phecda is from the Arabic for ‘thigh’ (of the bear). It is the 85th brightest star with an apparent magnitude of +2.41. The distance from earth is 83 light years. It is 27 times the size of the sun. Phecda marks the back hips of the bear or the base of the saucepan closest to the handle.

Wadi Rum is one of the best locations in the world to see the full beauty of the stars. Combining high altitudes, clear skies and no light pollution. You may be surprised how many stars are visible to the naked eye. Come with us and spend a night under the stars!