The Jordanian cuisine is an important part of traveller’s experience in Jordan. With buzzling food markets, numerous street food options and outstanding hospitality it is an unforgettable part of travelling in Jordan. The Jordanian food is part of the Levantine cuisine and is therefore similar to the food in Palestine, Lebanon and Syria. The four centuries of Ottoman rule had a large influence on the cuisine. The most famous Jordan dishes are Mansaf, Maqluba, Falafel and hummus. Staple ingredients are rice, tomatoes, onions, garlic, chick peas, flat bread and chicken. Sweets plays an important part of the cuisine, most notably Knafeh, Halva and Baklava. Sweet tea is the most common drink and is usually served with food. Furthermore, Arabic coffee and Turkish coffee is common. Alcohol is not widely drunk, especially in the rural parts. Jordanian pride themselves for their hospitality and food and beverages is a big part of that. Continue reading to learn everything you need to know about food in Jordan! 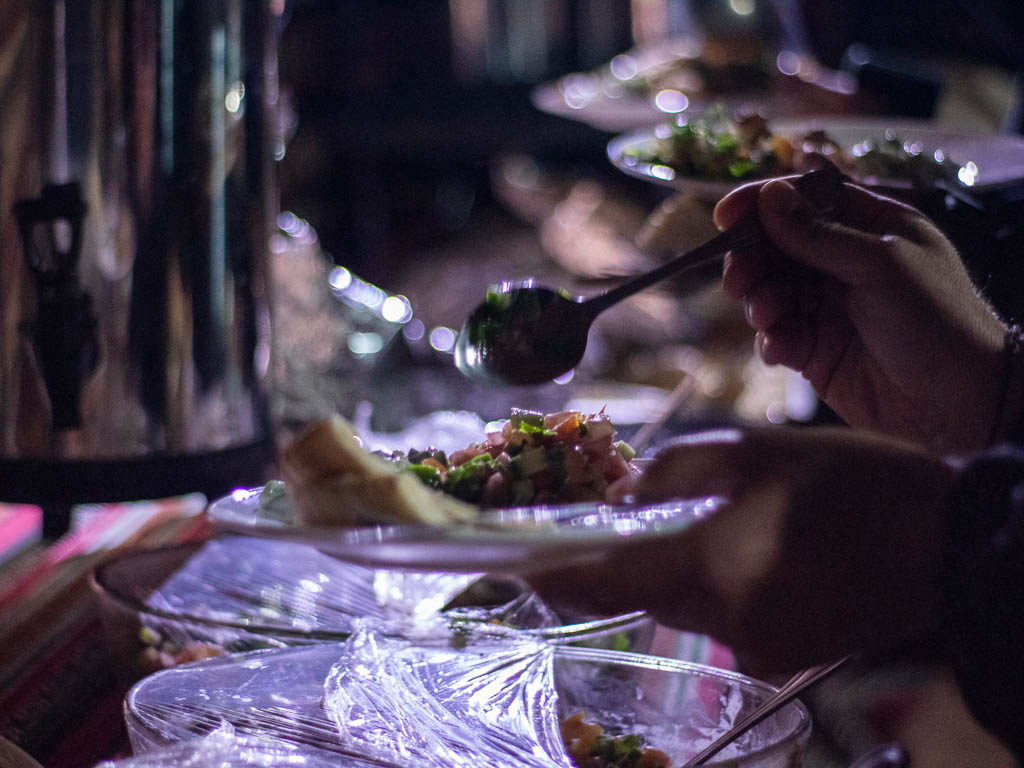 For many travellers in Jordan, the breakfast is one of the highlights of the Jordanian cuisine. Imagine sitting in a local family home, on the floor with your legs crossed as the wife of the household brings tray after tray with the dishes we list below. As with most meals, expect to eat with your hands! These are the Jordan breakfast dishes that you can’t miss:

Balls formed from spiced and ground chickpeas. The balls are then fried in vegetable oil and served hot. Delicious on their own, however usually consumed with hummus and pickled vegetables.

Hummus is one of the most well known dishes from the Middle Eastern cuisine, and is very common in Jordan. Hummus is a puré made from smashed, boiled chick peas, tahini, garlic and lemon juice. In Jordan fatteh hummus is also very popular. This is hummus mixed up with torn-up pita bread. Served on a ceramic plat and topped with a decent chunk of olive oil and sumac.

There is no secret that beans are one of the key ingredients in the Jordanian cuisine. Foul is a dish that you can order at most restaurants throughout the country. There are variations of this dish but the base is always fava beans topped with olive oil. Fresh parsley, cumin and garlic can be added.

A delicious and filling dip made from vegetables, common in the Jordanian cuisine. Eggplant, zucchini or capsicum are usual as base. The vegetables precooks in the oven or over the fire, and mashed and mixed together with garlic, olive oil and tahini. Serve with hot bread and enjoy!

The Jordanians take their tea very seriously. There are numerous different versions but the most popular tea is the one infused with herbs. The Bedouins in Wadi Rum drink sweet sage tea, make sure to try it!

In Jordan it is common to add cardamom which creates a spicier version of the coffee drunk in the west. The coffee is not filtered, therefore the grains sits at the bottom of the cup. 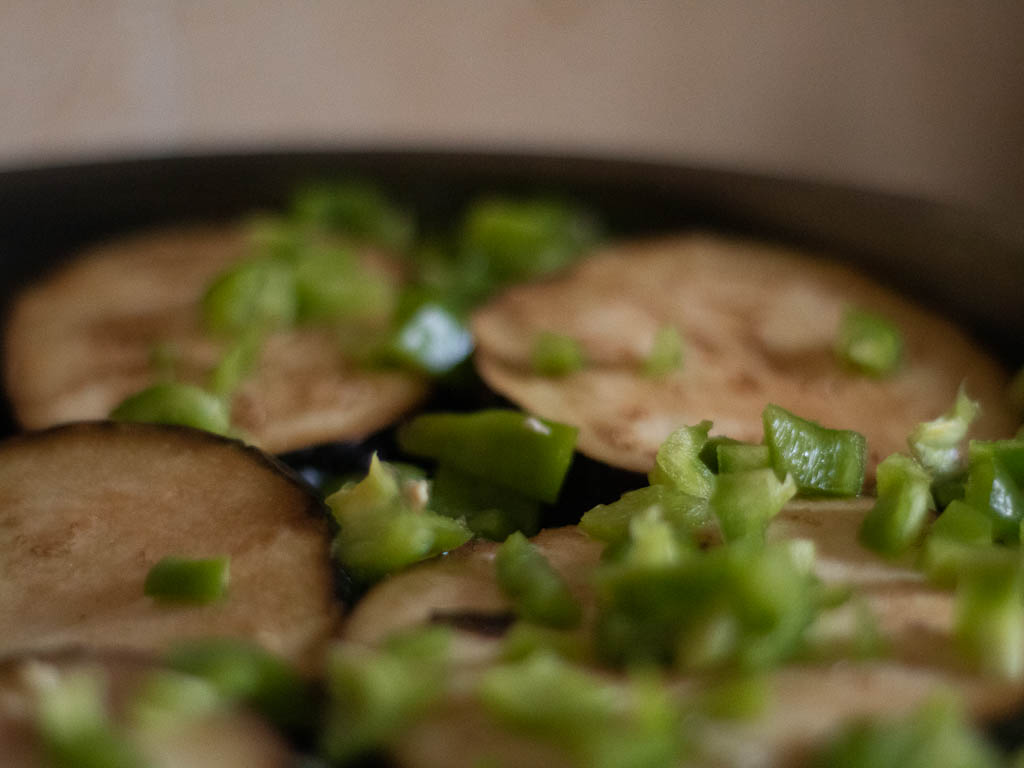 After breakfast, expectations should be set high on the Jordanian cuisine! Below we list the most popular dishes in Jordan, that can be enjoyed for lunch or dinner:

The most famous traditional dish in Jordan, often referred to as the national dish of Jordan. Mansaf consists of lamb cooked in a sauce of fermented dried yogurt. The preparation takes several hours. It is served with roasted nuts and seasoned with cardamom and cumin. According to the Bedouin tradition camel or sheep meat must be used, however nowadays it is common to substitute with chicken. Mansaf is served on traditional thin flat bread, shrak, placed on a big tray. It is usually served on big celebrations such as weddings.

Maqluba is a dish you should eat in Jordan. Vegetables such as potatoes, aubergine, onions, garlic and cauliflower are stirred in a big pot. Herbs are added such as turmeric and cumin. Meat is optional. When the vegetables has enough colour, water and rice is added to the pan. The rice is carefully placed to cover the vegetables. To serve, flip the pot upside down on a plate. Maqluba, which means upside down in Arabic, refers to this final moment of preparing the dish.

Kabsa has its roots in Saudi Arabia, but is common in most Arab countries. Chicken, goat or lamb is stirred together with vegetables and a mixture of spices such as cardamom, nutmeg and cloves.

Minced meet made of beef, chicken or lamb mixed with chopped onion and herbs, made into patties. Served with tahini sauce.

A traditional Bedouin dish! Marinated meat and vegetables placed in an underground oven. Covered with sand and allowed to cook for hours. We serve Zarb in our camp every night!

Grape leaves stuffed with rice and meat. This is cooked in a pot together with other stuffed vegetables such as aubergines, zucchinis and green peppers.

If you like parsley this is the option for you! This delicate, light and tasty salad consists mostly of parsley, mixed with chopped tomatoes, mint and onion. Its fresh and delicious and in additions, it’s a good alternative to the heavier part of the Jordanian cuisine.

Classic Arabic lentil soup. Flavoured with turmeric which gives it a healthy yellow colour, and served with freshly squeezed lemon.

The Jordanians have numerous way to prepare their chick peas salad, but one particularly tasty is with fresh chilly, parsley, onion served with a dressing made up of cumin, olive oil, lemon juice and a dash of sugar. Delicious!

Pickled vegetables served in most restaurants as a side to falafel.

Bread is an important part of food in Jordan and there are many alternatives. Make sure you try Shrak. This thin bread bakes on a convex mettle griddle over an open fire. 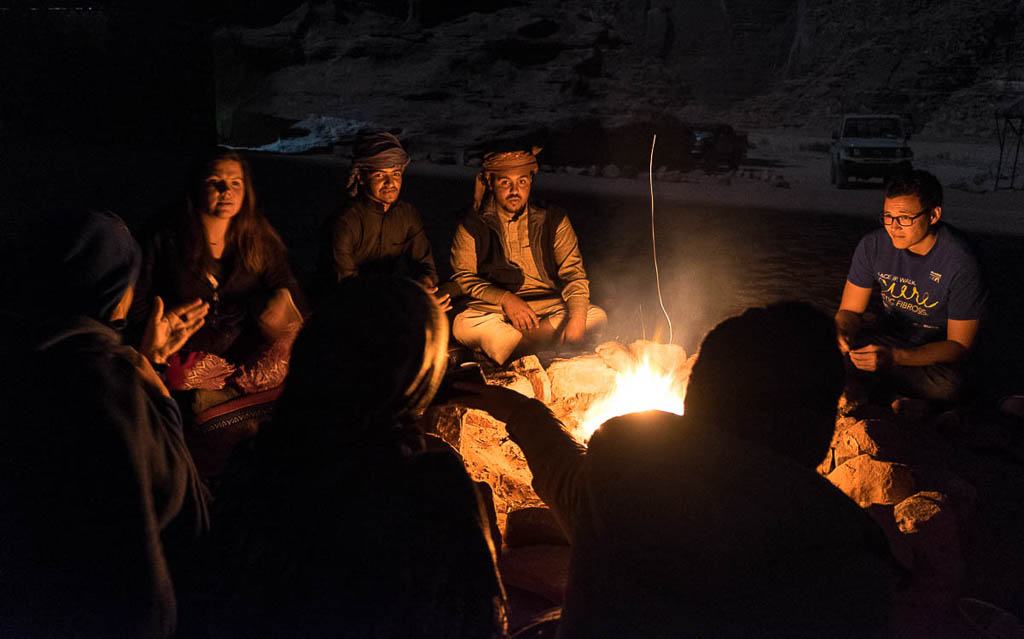 Wonderful sticky ice cream, that resembles the traditional ice cream but still is something else. Optional to top with chopped pistachio.

Calorie bomb! Fried pastry soaked in syrup. One is enough! But they still hold a special place for us as our tribal name is derived from our forefathers who traded this sweet.

This is a semolina cake that is common across Jordan. It can have a variety of flavour variations including walnut, coconut or date.

Maybe the best dessert you will ever have! Layers of cheese baked under crispy pastry threads and drizzled with syrup. Eat them fresh from the frying pan. There is a shop named ‘Habibah’ in downtown Amman that is famous for this. They dont do anything else and there is a constant line so it is always fresh. Be aware there are other places with the same name and branding but the original store is small and in a small alley with a small cashier out the front.

Vegan or vegetarian in Jordan

Jordan is a great destination for vegans and vegetarians. Although meat is a central part of the meal in the Jordanian cuisine, the meat is always accompanied with salads and other cooked vegetables. Furthermore most meals are served with bread or rice. In most restaurants vegans and vegetarians will be able to find an option that suits their need.

In some rural areas, locals will be surprise by the idea of vegans and vegetarians. But in general in Jordan people are open minded and used to tourists with different diets. Good snacks for vegan and vegetarians in Jordan that can be easily found in any supermarket include:

Cost of food in Jordan

In many cases in the Middle East prices can be higher than some locations in Europe. However Jordan is affordable for both food and accommodation. As with any destination, there are options for any budget. Depending on your Jordan budget, you can get by on anything from JOD10-JD50 a day for food expenses and have excellent food!

Falafel rolls are available throughout the country and cost less than JOD1. In most locations a good meal can be found for JOD10 or less.