The Bedouin tribes of Wadi Rum have typically been herders and traders. Most herds consisted of either sheep and goats or camels. Traditionally families have been semi-nomadic, grazing their herds by moving seasonally or following rains. During spring, after the winter rains, the main valley of Wadi Rum becomes green and herds move into the area. This migration still occurs today for the family members that continue to graze livestock.

Over the past century, since the English took control of the region following the WWI Arab revolt of the Ottoman empire, life has steady transitioned into a more sedentary lifestyle. Driven by the establishment of government schools, hospitals and markets, many families began to relocate into Wadi Rum Village. Some family members continue to graze animals for their primary income, but increasingly people sought jobs in the village. The army, nearby aquifer, railway and village services began to employ increasing numbers of Bedouins. When herds moved closer to the village during spring, families would be able to commute each day from nomadic encampments to the village for school or work. However, as younger generations became accustomed to village life increasingly people became reluctant to leave the village.

In the 1980’s tourism became increasingly relevant to the economy of Wadi Rum. Therefore, many families began to accommodate visitors in their camps to supplement their income. As families began to understand the economic benefit of tourism, young people increasingly aspired to learn English and attract tourism to support their families. Therefore a new generation of Bedouin emerged, who began to distance themselves from the herding lifestyle. It increased the value that Bedouin families placed on education and particularly language and accelerated the move towards sedentary life. 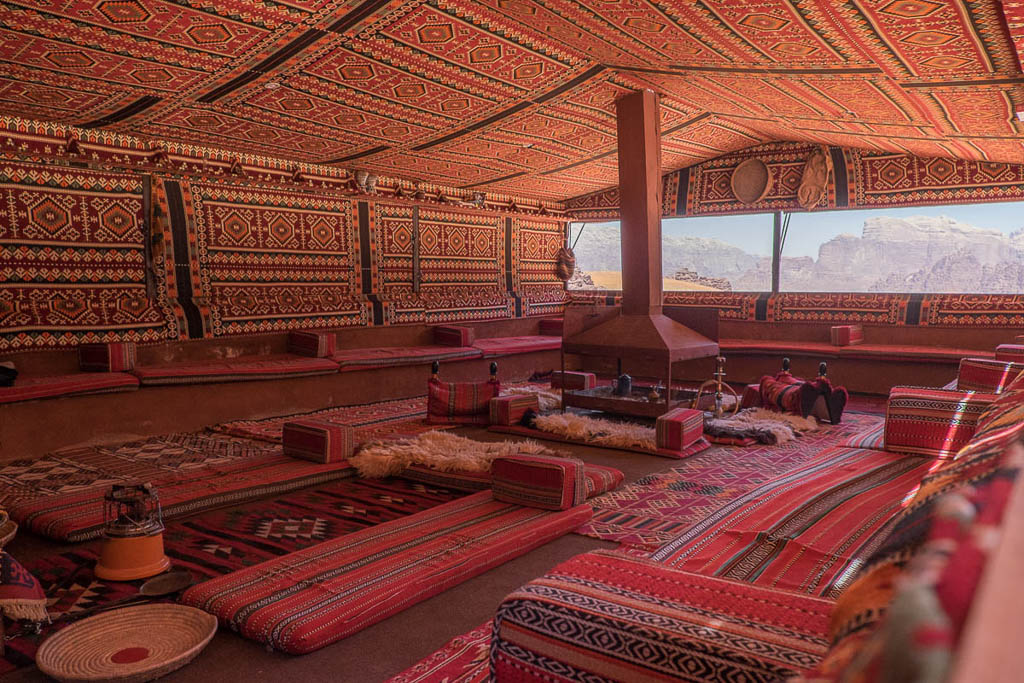 Bedouin encampments are very basic by western standards and are very minimalist, due to the requirement for seasonal relocation. Given that most families had spring grazing grounds close to the village they began to improve these facilities to allow themselves to better cater to visitors. Initial improvements included tents specifically to host guests, increased water storage and simple squat toilets. As tourism continued to become increasingly viable and a more substantial part of families income, younger family members who were competent English speakers began to host guest in their gradually improving spring encampments year round.

The nearby community of At Dise has a larger population and a far stronger economy, as it was a regional hub based on desert oasis with significant water supply. They began to invest significant money into building large camps. These locations nearby to Wadi Rum had the capacity to cater to the mass tourism that was increasingly visiting the Wadi Rum desert. The family camps in Wadi Rum followed suit and began to arrange their camps specifically for hosting visitors and used alternate grounds for the grazing of animals. 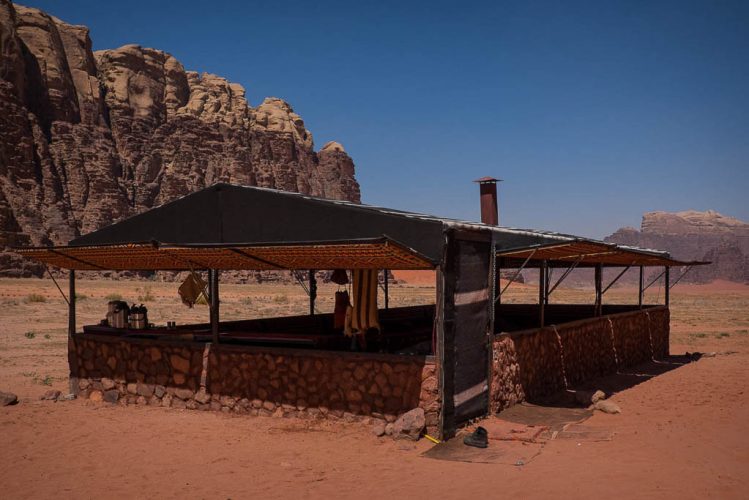 Improvements occurred rapidly. Bathrooms were fitted with running water, showers and western toilets. Solar panels and generators purchased for electrical needs. Beds brought to camps and kitchens built. The Bedouins purchased 4X4s to transport visitors and take tours of the desert. Some camps significantly expanded their capacity for guests. Every family aimed to improve their offering and outside investors began to arrive to Wadi Rum, building luxury offerings. UNESCO has repeatedly stated that only traditional camps can exist in the Protected Area, which resulted in a large concentration of bubble tent offerings being built outside At Dise.

The result is camps with private tents for guests to sleep, western bathroom facilities, expanded solar capacity for 24 hour electricity, running hot water and comfortable social spaces. In the cove to the south of Arabian Nights you can see a camp that evolved to cater to guests, and in the small cave to the north you can see some basic facilities. These show examples of the progress from seasonal livestock camp to tourism camp. As you can observe here the camp is ever evolving but is now established solely for the comfort and enjoyment of visitors. As with all of the families that have camps within the Protected Area, we offer tours to visit our extended families who still live a semi-nomadic herding lifestyle. People who have chosen this life path do not speak English but we are always happy to visit them and happy to explain any questions you may have.