The Aquila constellation is one of the original 48 constellations listed by the Egyptian mathematician Ptolemy, who lived under Roman rule in Alexandria in the 2nd century. These constellations formed the basis for the modern list agreed by the IAU. Constellations from the southern hemisphere, unable to be seen from the Mediterranean, represent the majority of additions to the list.

Primary stars: 7 (5 stars in a cross with a central star for the body and wings, 2 additional stars for the head) 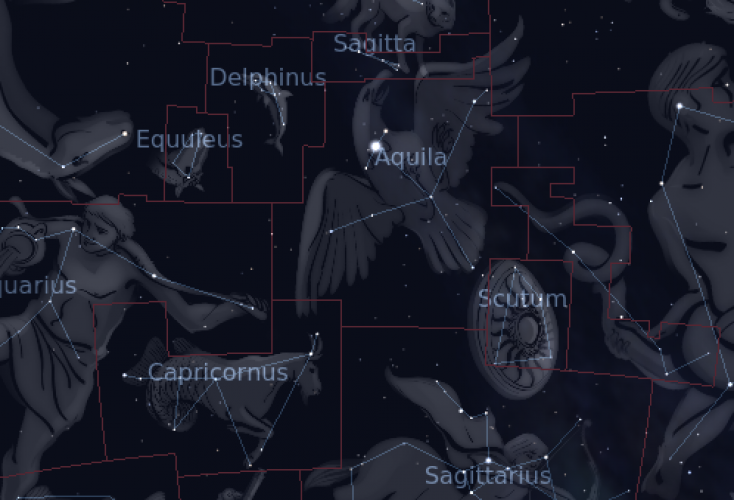 Which months can you see Aquila constellation?

Aquila constellation can be seen from February to December but can be found high in the sky at 21:00 during the month of September:

As time passes the constellation will gradually appear earlier in the night with ranges below showing the window of opportunity in each month. Aquila constellation sits between 15 degrees north – 5 degrees south latitude. Therefore, the further south your position the further north it will appear in the sky. At its maximum range it is possible to see Aquila at latitudes between +90 and -75.

Best visible at 21:00 in September

October: 65 degrees at its peak trajectory above the southern horizon at sunset. It will continue moving west until 00:00 when it will begin to be only partially visible on the western horizon.

How to find Aquila constellation?

Identifying with the Summer Triangle

Learn how to form the shape of Aquila constellation

The shape of Aquila is a simple soaring eagle. with a body and outstretched wings. The head contains 3 stars representing the eagles head scanning the land below. The body runs along the band of the milky way and the wings are angled around 30 degrees towards the head.

The head of the eagle:

The body and tail of the eagle:

The wings of the eagle:

The two wings are equidistant from the chest and are prominent stars. The tip of the wing is slightly further from the chest than the tail and perpendicular to the midpoint between the head and chest. Imagine the wings at the highest point when flapping. 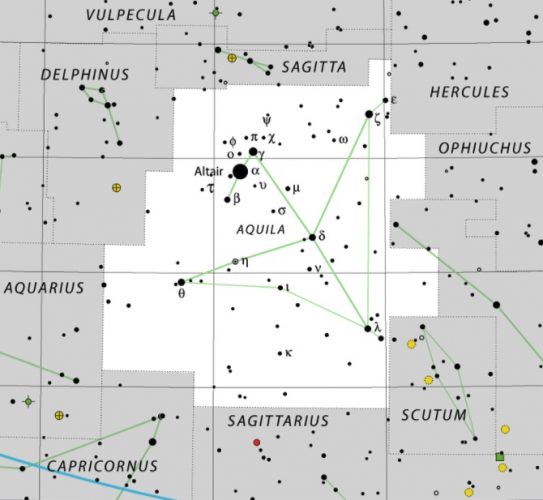 Aquila constellation in the Ancient World

Although most modern constellations were first published by Ptolemy within the Roman empire and trace origins to Babylon through ancient Greece, Aquila is suggested to instead have origins in ancient Egypt. Stories have associated the eagle with Zoroastrianism and the practice of towers of death. Where dead bodies were placed in towers so that birds of prey would scavenge and carry their souls to heaven.

Many scholars have however suggested that the constellation is one of few that does not have origins in Babylon and instead is connected to Horus the Egyptian god of the sun. The Daressy Zodiac or Zodiac of Cairo is an Egyptian artefact that shows the Hellenic Zodiacs alongside the Egyptian equivalent. The bronze disc shows an Falcon (or Eagle) alongside Sagittarius and is the primary evidence for the constellations origin in Egypt.

In Greek mythology Aquila was associated with the eagle that carried the lightening bolt of Zeus. There are several stories of Zeus transforming himself into an eagle. Ancient texts reference the ability of eagles to look directly into the sun and being immune to lightening strikes. The Eagle holding a lightening bolt became the image of the Roman legion and was displayed on their shields.

In eastern folklore, the Chinese recognise the star Altair and Vega of neighbouring Lyra constellation as two lovers separated by the river of the milky way. in Hindu, Buddhist and Jain beliefs the constellation is associated with Garuda the half eagle-half human deity. 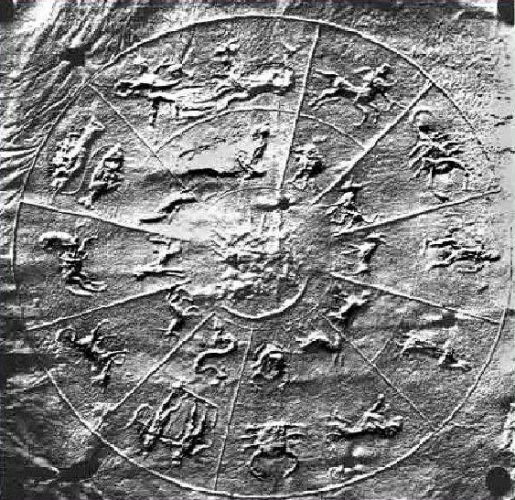 Altair is from the Arabic phrase ‘flying eagle’. It is the 12th brightest star with an apparent magnitude of +0.77. The distance from earth is 17 light years. It is more than 5 times the size of the sun and noted for having a very rapid rotation. Altair appears at the head of the eagle.

Tarazed is a Persian word meaning ‘scale’ as in balancing scale. It is the 118th brightest star with an apparent magnitude of +2.72. The distance from earth is 395 light years. It is over 850,000 times the size of the sun. Tarazed is alongside Altair at the head of the eagle.

Okab is from Arabic meaning ‘tail’, however its position in the constellation is on the wing. It is the 171st brightest star with an apparent magnitude of +2.99. The distance from earth is 83 light years. It is a double star system. Okab marks the left wing of the eagle as seen from below.

Tseen Foo is from the Mandarin for ‘celestial drumstick’ as it forms part of an asterism of this name in Chinese astronomy. It is the 218th brightest star with an apparent magnitude of +3.24. The distance from earth is 286 light years. It is a double star system with the primary star around 110 times the size of the sun. Tseen Foo marks the right wing of the eagle as seen from below.

Hercules – Corona Borealis Great Wall – The largest identified structure in the universe with a span of 10 billion light years which crosses several constellations as reflected in its name.